“When I make a Mistake, it’s a Beauty” Fiorella H. La Guardia 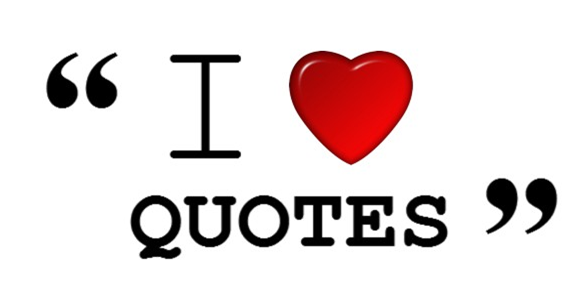 Quotes are excerpts from a speech, book, or film which inspire others. Knowledge is power but words maybe more powerful. It is known that words can inspire and also destroy. Words can bring freedom and also cause captivity. Words can give hope and also bring despair. Words can heal wounds but also injure. It depends on how the words were crafted and presented. I sincerely hope that each volume of ‘I ❤ Quotes’ will inspire you and help you understand life, its hidden treasures as well as others. Do have a good read.

“If you ever find yourself in the wrong story, leave”.

“Perhaps the greatest faculty our minds possess is the ability to cope with pain. Classic thinking teaches us of the four doors of the mind, which everyone moves through according to their need.

First is the door of sleep. Sleep offers us retreat from the world and all its pain. Sleep marks passing time, giving us distance from the things that hurt us. When a person is wounded, they will often fall unconscious. Similarly, someone who hears traumatic news will often swoon or faint. This is the mind’s way of protecting itself from pain by stepping through the first door.

Second door is the door of forgetting. Some wounds are too deep to heal, or too deep to heal quickly. In addition, many memories are simply painful, and there is no healing to be done. The saying ‘time heals all wounds’ is false. Time heals most wounds. The rest are hidden behind this door.

Last is the door of death. The final resort. Nothing can hurt us after we are dead, or so we have been told”.

Patrick Rothfuss, The Name of the Wind (The Kingkiller Chronicle)

“A wonderful fact to reflect upon, that every human creature is constituted to be that profound secret and mystery to every other”.

“I know enough to know that no woman should ever marry a man who hated his mother”.

“According to Madam Pomfrey, thoughts could leave deeper scars than almost anything else”.

J.K. Rowling, Harry Potter and the Order of the Phoenix

“Two things that are infinite: the universe and human stupidity; and I’m not sure about the universe”.

“Be the change that you wish to see the world”.

“Without music, life would be a mistake”.

Friedrich Nietzsche, Twilight of the Idols

“Go to heaven for the climate and hell for the company”.

“All that is gold does not glitter,

Not all those who wander are lost,

The old that is strong does not wither,

Deep roots are not reached by the frost.

From the ashes a fire shall be woken,

A light from the shadow shall spring,

Renewed shall be the blade that was broken,

The crownless again shall be king”.

J.R.R Tolkien, The Fellowship of the Ring

“I love you without knowing how, or when, or from where,

I love you simply, without problems or pride,

I love you in this way because I do not know any other way of loving you but this, in which there is no I or you,

So intimate that your hand upon my chest is my hand,

So intimate that when I fall asleep your eyes close”.

“I love you as certain dark things are to be loved,

In secret, between the shadow and the soul”.

“Only the very weak-minded refuse to be influenced by literature and poetry”.

“The Seven Social Sins are:

Fredrick Lewis Donaldson, From his sermon in Westminster Abbey, London, on March 20, 1925.

“Never memorize something that you can look up”.

“Science without religion is lame, religion without science is blind”.

“If we know what it was we were doing, it would not be called research, would it?”

“Every strike brings me closer to the next home run”.

John Bingham, No Need for Speed: A Beginners Guide to the Joy of Running

“If you know anyone who’s depressed, please resolve never to ask them why. Depression isn’t a straightforward response to a bad situation; depression just is, like the weather.

Try to understand the blackness, lethargy, hopelessness, and loneliness they’re going through. Be there for them when they come through the other side. It’s hard to be a friend to someone who’s depressed, but it is one of the kindest, noblest, and best things you will ever do”.

Dale Carnegie, How to Win Friends And Influence People

“I went to a bookstore and asked the saleswoman, ‘Where’s the self-help section?’ She said if she told me, it would defeat the purpose”.

“Anger, resentment, and jealousy doesn’t change the heart of others—it only changes yours”.

Shannon Alder, 300 Questions to Ask Your Parents Before It’s Too Late

“The only time you fail is when you fall and stay down”.

Stephen Richards, Cosmic Ordering: You can be Successful

“Let your plans be dark and impenetrable as night, and when you move, fall like a thunderbolt.

Sun Tzu, The Art of War

“If I love you, what business is it of yours?”

“In the midst of chaos, there is also an opportunity”.

“You have to be burning with an idea, or a problem, or a wrong that you want to right. If you’re not passionate enough from the start, you’ll never stick it out”.

“What would you do if you weren’t afraid?”

Sheryl Sandberg, Lean in: Women, Work, and the Will to Lead

“So many books, so little time”.

“You only live once, but if you do it right, once is enough”.

“Insanity is doing the same thing, over and over again, but expecting different results”.

“The person, be it gentleman or lady, who has not pleasure in a good novel, must be intolerably stupid”.

Groucho Marx, The Essential Groucho: Writings for by and About Groucho Marx

QUOTE OF THE WEEK:

“Only a well-fed, well-housed, well-schooled people can enjoy the blessing of liberty”.