24 hours after the confirmation of the first coronavirus case in Anambra State, St Joseph’s Hospital, Adazi-Nnukwu, the facility where the State’s COVID-19 index case was first hospitalized for days, has revealed they are yet to receive results of test samples that confirmed the patient positive.

The Administrator of the Hospital, Reverend Father Jerome Okafor disclosed in a statement Saturday, that the patient whose identity they did not reveal, was admitted for heart problem at the Joe Nwiloh Centre, an arm of the hospital responsible for the treatment of patients with heart diseases.

Anambra State Governor, Willie Obiano had earlier today in a broadcast, confirmed that the State recorded its first COVID-19 case yesterday and the patient has been isolated.
Rumours have been making the rounds that the index case has run away from the hospital when he was found to be suffering from the dreaded disease.

But the hospital said the case got better, paid his medical bills and was discharged although against medical advice because he insisted he wanted to go home.

“The patient was admitted at Dr. Joe Nwiloh Heart Center of St. Joseph’s Hospital for heart problem on Tuesday, April 7, 2020. A medical officer who went to attend to him noticed that he was coughing out blood and shivering. He suspected that the patient has symptoms of COVID-19 and informed the Cardiologist who admitted him. He did not think that the symptoms indicated were strong enough to suggest the virus infection, but authorized the staff to call the office of the Nigeria Center for Disease Control (NCDC). 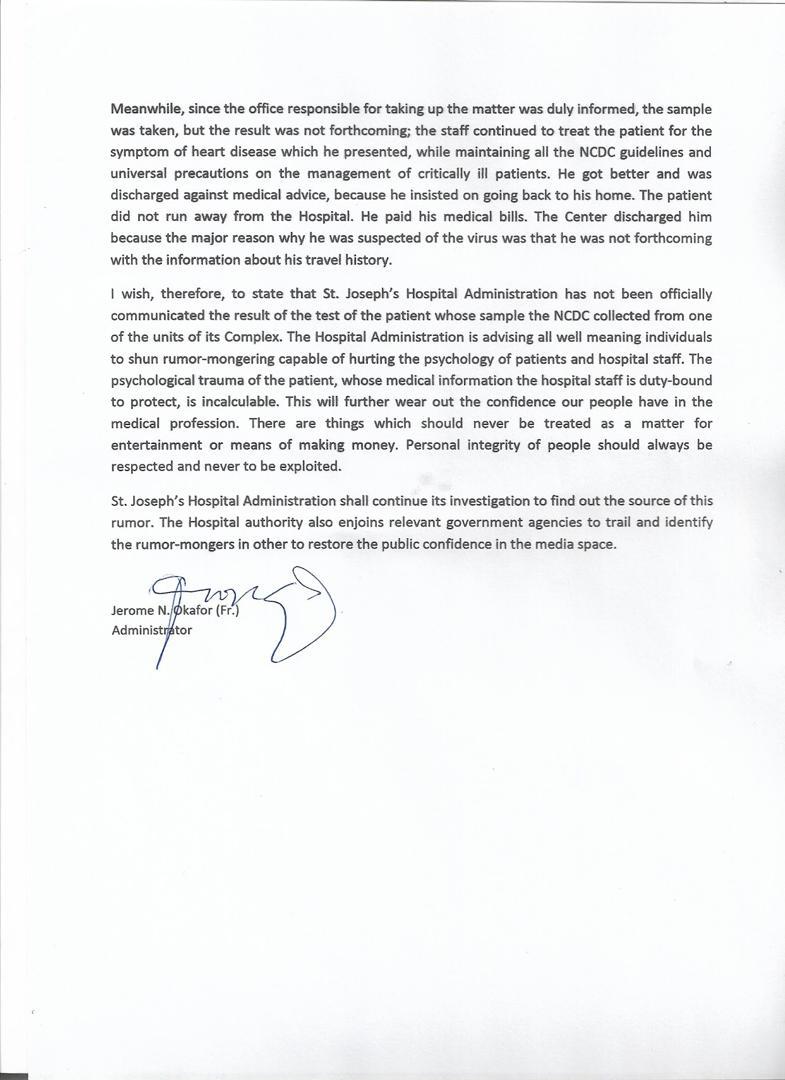 “They did so several times and each time, the office assured them that their staff was coming. After sixteen hours of waiting, the authority of the centre decided to send a delegation to the office of the Chief Medical Officer of Chukwuemeka Odumegwu Ojukwu University Teaching Hospital, Amaku-Awka, after which a team was sent to take the man’s sample for testing and to transfer him to Government designated isolation centres. The team said the result will be ready in forty-eight hours,” Fr Okafor narrated.

He continued; “After forty-eight hours, the medical team delegated to follow up the case began to call the NCDC office. All they could get after several phone calls was a verbal report that the index patient is positive. Up till now, the Hospital Administration has not received any official report of the result of the test.”

He further revealed that since the office responsible for taking up the matter was duly informed, a sample taken, but the result was not forthcoming, the staff continued to treat the patient for the symptom of heart disease which he presented.

“He got better and was discharged because he insisted on going back to his house. The patient did not run away from the Hospital. He paid his medical bill. The Center discharged him because the major reason why he was suspected of the virus was that he was not forthcoming with the information about his travel history,” the hospital administrator said.
He stated categorically that the hospital has not been officially communicated that patient tested positive for coronavirus.

“What the Hospital Administration is reading from the internet and other media outlets, is that St Joseph’s Hospital has a COVID-19 patient. It is a surprise. The blackmail of the Hospital seems calculated. The psychological trauma on the patient, whose medical information, the hospital staff is duty-bound to protect, is incalculable. This will further wear out the confidence our people have in the medical profession,” he regretted.