For the vibrant young talents at Mavin Records, the future is here and now. The Don Jazzy-led music hub is currently teeming with boundless potential.

One of such talents is the beautiful and gifted Ayra Starr who has just released her debut album titled “19 and Dangerous”.

Bongos Ikwue: The Fine Wine That Gets Better With Time

Production on the album was handled by Don Jazzy, London, Louddaaa, and Andre Vibez. The tracks were expertly mixed and mastered by Johnny Drille.
This album drop comes only a few days after she released her debut amapiano single “Bloody Samaritan” which was produced by London. 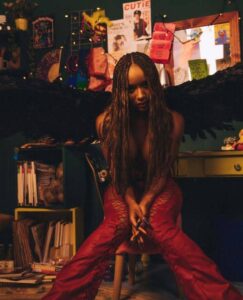 Ayra Starr—real name Oyinkansola Sarah Aderibigbe—was born on the 14th of June 2002 in Cotonou, Bénin and grew up there and in Lagos, Nigeria. She was born to Nigerian parents from Kwara. Her family moved frequently during her high school years because of her father’s business, and as a result she had a hard time forming close friends.

She relied on music to get through her loneliness. According to Ayra, Nicki Minaj was one of her biggest icons growing up. Who would have thought music, which was only a comforting hobby, would be what would make her a star!
Her journey into the mainstream was given a huge boost with the popularity of her hit single “Away”.

It was instantly obvious for all to see that she was a star in the making. Her vocal dexterity, looks, and charisma were too good to ignore.

This new album is her second project under the Mavin umbrella, the first being her eponymously titled extended play which contained “Away”. The EP convinced the afropop/R&B scene that she is a beautiful flower destined to bloom.

Hopefully, “19 and Dangerous” is just a stepping stone on a journey that will lead to pleasant places.

Bongos Ikwue: The Fine Wine That Gets Better With Time