Post Views: 93
Wife of Anambra State Governor, Chief Mrs Ebelechukwu Obiano has said the only way to end rape and other forms of violence against women is when victims learn to start speaking out and not hide their hurt.
Mrs Obiano was speaking on Monday when she commenced her annual local government tours with Awka South Council Area.
Anambra has been a major flashpoint in terms of rape and forms of gender-based violence with over 100 cases of rape recorded since the lockdown occasioned by the coronavirus pandemic earlier this year, according to statistics from the State Ministry of Women’s Affairs, Children’s Welfare and Social Development.
According to Obiano, rape is evil before God and man, as it leaves a lasting scar as well as a feeling of insecurity in the mind of the victim.
“The menace of rape and other forms of gender-based violence is a monster we all must unite and fight. A major contributing factor to its spate in our society is our people’s deadly silence. And that is why we encourage our people especially the victims, to always speak up,” she said.
The governor’s wife said the state government has strengthened systems within the Ministry of Women’s Affairs, to address the growing incidents of violence against women but maintained that the cases must be duly reported for government to take action.
On the annual visit, Mrs Obiano noted that despite the lockdown and economic hardship caused by COVID-19, APGA members have remained steadfast in their support for Governor Obiano’s administration, hence the need to show appreciation.
She charged the women to continue to adhere strictly to COVID-19 protocols, stressing that the virus is still very much around and deadly too.
The Anambra first lady also at the event, distributed food items as well as other relief materials to women in the council area.
Distributing the items, she urged the women to utilize various skill acquisition programs offered by the Ministry of Women Affairs to be productive and help their families as the COVID19- induced hardship bites. 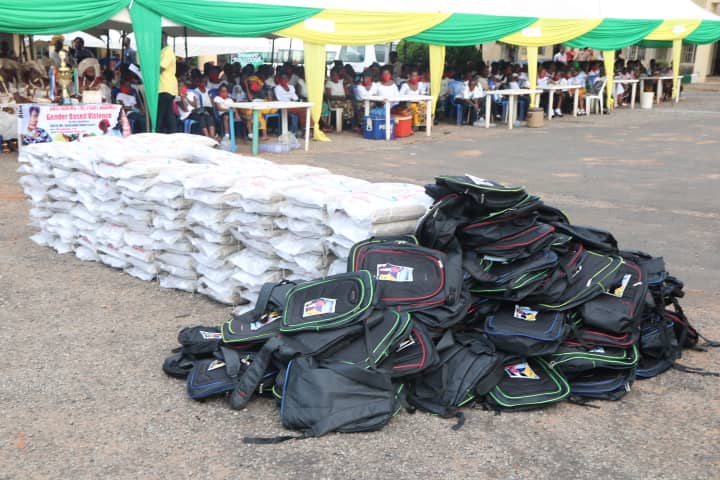 “The programs are free of charge. I assure you that CAFÉ will continue to empower people even when we must have left power in the state”, She said.
On her part, the Commissioner for Women and Children Affairs, Lady Ndidi Mezue described Mrs  Obiano as a mother that genuinely cares for her children.
Lady Mezue recalled that for the past six years, the governor’s wife has continued to empower vulnerable women and children irrespective of a political party.
In her words, “What is happening today has become a tradition for Her Excellency. The whole initiative is to appreciate our women for their support towards the state government and also to enlighten them on the programs of government aimed at bettering their lives. This, the governor’s wife has successfully done for the past six years and Anambra women are grateful for that,” Lady Ndidi said.
Earlier in his remarks, the Transition Committee Chairman of Awka South Local Government Area, Hon. Leo Nwuba thanked Mrs Obiano for coming to Awka South to empower women and children every year and assured Mrs Obiano of the continuous support of his people, to her and to Governor Willie Obiano.
The Principal Secretary to the Governor, Mr Willie Nwokoye, Majority Leader of Anambra State House of Assembly, Dr. Nnamdi Okafor, wife of the National Chairman of APGA, Mrs Mary Oye and others who spoke during the event thanked Mrs Obiano for her magnanimity and prayed God to continue blessing her and her family.
About 15 aged women, 20 indigent women, 15 less privileged children and 5 physically challenged persons received foodstuffs, cash and other items.