Fans of Nigeria’s superstar musician, Olamide, are finally relieved from their anxious waiting of his much-anticipated album. The musician has been on the low for quite a while now, not even a single was heard from him. But he assured his fans and music lovers around the world that he was up to something big.

From what we gathered through the reactions of those who were at the listening party, simply put, the album with the name Uy Scuti was worth the wait. The album is trending on Nigeria’s twitter space at number one.

Other big guns in the industry took turns to congratulate the Badoo crooner on the release of the album, including Don Jazzy, Perruzi, Timi Dakolo and even comedian McMacaroni. 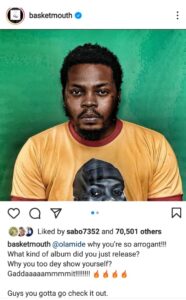 Basketmouth, employing what can be said to be a twisted sarcasm in an Instagram post asked Olamide why we was so arrogant and like showing himself off. Olamide understood the joke and told him he was grateful.