by Kenechukwu Ofomah
in News, trending
0 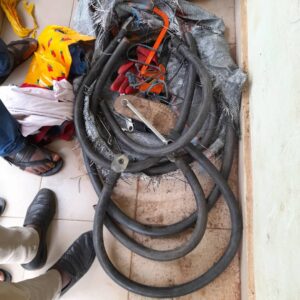 He said they were apprehended along with the recovered vandalized items and a Nissan Hummer bus used for the operation.

Eze decried incessant attacks on its power installations across the South East, describing the ugly development as worrisome.

He said, “The increasing rate of attack on our facilities has become a source of worry for us as an organisation.

“It is even more worrisome that despite the series of arrests and convictions, these vandals are bent on perpetrating their heinous acts which are affecting our operations and inconveniencing our customers”.

The EEDC spokeperson further stated that the attack is one out of so many that has taken place within the EEDC network in the past two months.

“Almost on a daily basis our substations are attacked and this has caused a retrogression in the quality of service delivery to our customers”.

Ezeh commended vigilante groups and government security agencies for their support and roles played in the apprehension of vandals and enjoined them not to relent.

He appealed to customers to adopt an ownership attitude towards power installations cited within their environment, describing fight against vandalism as a collective effort of both customers and EEDC, which can be achieved if all hands were on deck.

It will be recalled that sometime in May 2021, activities of vandals resulted in over 50 communities in Enugu and Ebonyi states being thrown into darkness following the attack on Amechi -Agwu 33kV mainline, with over 40 spans of Aluminum conductors removed and more.

Aggrieved Igbo Youths Say Nigeria Will Break in 2023 if…