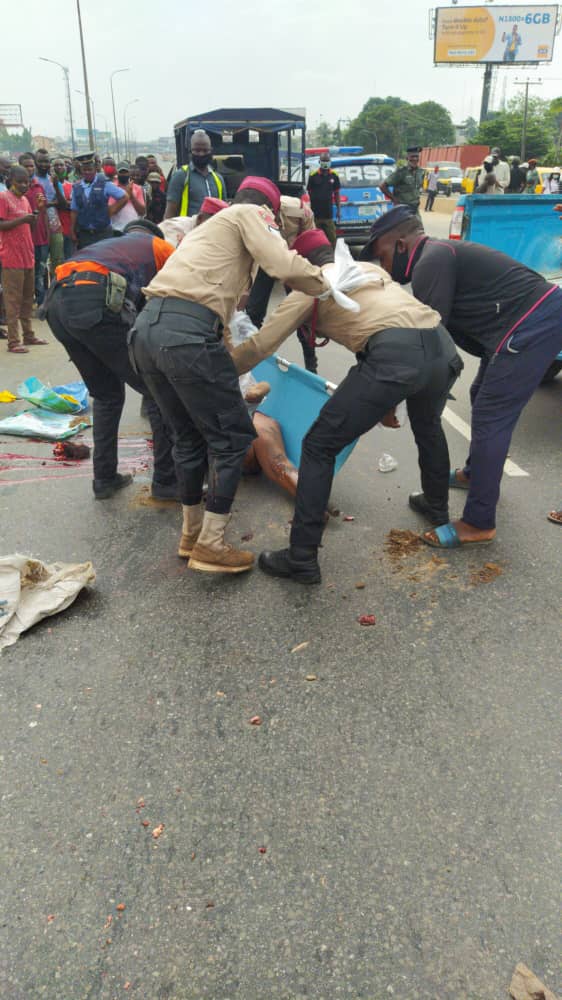 A middle-aged woman this morning lost her life, after she was knocked down by a DAF truck while crossing the Onitsha –Awka expressway in front of Coca-Cola Depot, Onitsha.

The crash, according to an eye witness, happened at about 9am when the driver of the green coloured DAF truck with registration number USL860ZC lost control of the vehicle while trying to avoid other pedestrians crossing the expressway.

When TNC arrived the scene some minutes after, FRSC rescue team from Onitsha Unit Command and Upper-Iweka Outpost were on the ground trying to evacuate the corpse of the dead woman.

Confirming the accident, the Public Education Officer of the Federal Road Safety Corps (FRSC), Pascal Anigbo said the corpse was deposited at Toronto Hospital, while the vehicle was handed over to the NPF at Okpoko Police Station, for further investigation.

He equally warns drivers to shun every form of dangerous driving and to always drive defensively while tolerating other road users, urging pedestrians to always make use of the pedestrian bridge where available.

“We wonder what the role of government is again, if not the protection of lives and property. If the government cannot just provide this life-saving infrastructure, then the government has failed. It is surprising that despite the huge revenue government rakes in from this market and the ones across the road, they have refused to hear our cry to build a pedestrian bridge here. It is worrisome and we will continue to blame these avoidable deaths on government’s irresponsibility,” they said.