Post Views: 80
Awka – Hundreds of tippers drivers on Monday blocked the Upper Iweka Onitsha -Asaba expressway to protest alleged imposition of taxes, intimidation and violation of court judgement in their favour, by the agents of Anambra State government. 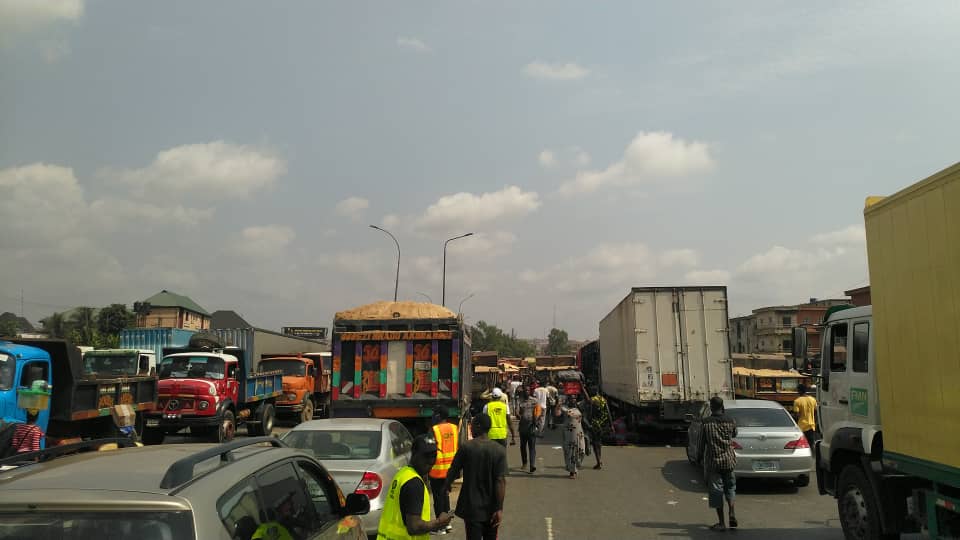 This is not the first time the tipper drivers are blocking roads in the state, as they had at some point, blocked the entrance of Anambra State Government House in Awka, in a bid to get government to hear their cries.
The situation today, caused severe hardship for commuters in Onitsha as security agencies battled in vain to appease the protesters, who practically grounded socioeconomic activities in the commercial city.
Protesting under the aegis of great Tipper Drivers’ Association of Nigeria, the drivers bore placards in protest over what they tagged government’s silence over their grievances despite various appeals, correspondences and visitations to decision-makers.
They claimed that drivers with six cubic tippers and 12 cubic tippers were respectively taxed N100 and N200 daily during the tenure of former Governor Peter Obi but the current administration allegedly tax them N700 and N500 welfare ticket per trip of laterite, gravel, sands or stones.
The Vice President of the Association, Ben Udenwa who led the protest, said the protest was because of the double taxation and illegal revenue collections which they suffer as tipper drivers.
“Last week, some of the old executives connived with the contractors inaugurated by the State Commissioner for Transport, Afam Mbanefo to print revenue tickets. They engaged thugs to enforce the collection of those levies and inflicted a lot of injuries on our members and three persons were hospitalized. Today again, they came out again and that is why we came out to protest so that government will hear us,” he said.
Udenwa said the tipper drivers have a court judgement from the state high court in 2015 that prohibited the illegal revenue collection, which government failed to honour, saying that was the reason for previous protests across the state by the drivers.
“For all the while our members have been protesting, the governor has refused to meet with the drivers and find solution to their challenges. It is very worrisome. We have seen unwarranted increase in the monies they collect from us and this does not help us. From N100 and N200 up to N2,000 and they are not ready to help us,” Udenwa said.
He appealed to the state governor, Willie Obiano to come to their aid and address the agitations of the drivers.
Some travellers and motorists that were stranded due to the non vehicular movement, expressed their displeasure on the ugly incident.
Efforts to get the State Commissioner for Transport, Afam Mbanefo to speak on the matter proved abortive as at the time of filing this report as he did not take his calls.