Awka – The Department of State Services, DSS has cleared the President of the Athletics Federation of Nigeria, AFN, Engr Ibrahim Shehu Gusau of any criminality in the PUMA contract signed by the former AFN board.

This followed a report to the DSS after information provided the DSS by the Sports ministry.

The DSS stated in a discharge letter, that the President of the Athletics Federation of Nigeria AFN, Ibrahim Shehu-Gusau is not guilty of any criminal allegation.

A report from the office of the Minister had accused Gusau of criminal misconduct over a non-disclosure deal between the AFN and Sportswear manufacturing company, PUMA.

However, a valid document sent to the Minister since September 4, 2020 which was well kept away from the media, revealed that Ibrahim Shehu-Gusau and Mr. Sunday Adeleye, owner of Dynamic Sporting Solutions Nigeria Limited were cleared of any wrongdoing by the Department of State services and advised that other internal issues be settled internally. 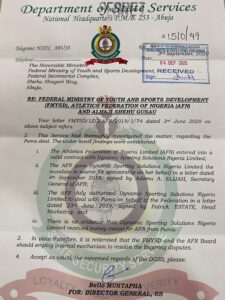 The DSS stated; “The Athletics Federation of Nigeria AFN entered into a valid contract with Dynamic Sporting Solutions Nigeria Limited.

“The AFN gave Dynamic Sporting Solutions Nigeria Limited the mandate to source for sponsorship on her behalf in a letter dated 4th September 2018 signed by Ademu A. Elijah, Secretary-General of AFN.

“In view, therefore, it is reiterated that the FMYSD and the AFN Board should employ internal mechanisms to resolve the lingering disputes,” the DSS stated.

The AFN leadership wondered why such a letter clearing it of any fraudulent activity was hidden from the public while the ministry went around maligning its leadership.

It described the ministry’s excuse, that Team Nigeria Athletes to Tokyo will not use the Puma kits due to ongoing investigation, as a mere cover-up to deceive Nigerians.

Meanwhile, in a letter dated July 19, 2021, and signed by Prince Adisa A. Beyioku, the Ministry of Youth and Sports had requested that the kits be released to team Nigeria for the Olympics despite its accusations of the Ibrahim Shehu-Gusau led board.