by Kenechukwu Ofomah
in trending
0

Awka – Governors of the Southeastern states have been urged to deemphasize their personal interests and prioritize the people’s interests, so as to reclaim their influence over the led. 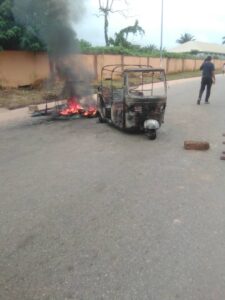 The recent days have seen people of the region disregard directives to come out and do their normal businesses, in violation of the directive of the Indigenous People of Biafra, IPOB, to sit at home.

Governor Willie Obiano had threatened that any bank in the state that fails to open on Monday, will be shut down for one week.

However, no bank heeded the directive, as yesterday was again another shutdown in the zone.

On Tuesday, a commercial tricycle was burnt and the driver cut severely in Awka, for not heeding the sit-at-home order, while there were reports of violence from other parts of the state.

Speaking to TNC correspondent in Awka, the National Secretary of Ohaneze Ndigbo Youth Wing, Comrade Chukwuma Okpalaezeukwu said the sit-at-home compliance is a pointer to the fact that the governors are no longer in control of the various states.

According to Okpalaezeukwu, the defiance of the directives of the governors for the people to go about their normal businesses, is a strong message to the political leaders in the region that the people can no longer take their mistakes any more.

“We went round today and we observed over 90 percent compliance with the sit-at-home. It is not easy especially with the commerce potential of the region. However, it is a strong message to the political leaders that the people can no longer take their nonsense. The compliance is also giving credence to the demands of the IPOB,” he said

Okpalaezeukwu who recalled how they engaged the IPOB in 2017 over their position on non-conduct of the governorship election in Anambra, said their findings showed that the IPOB was a peaceful organization.

“When we approached the IPOB then on the mandate of our people, I had an encounter with the IPOB up to their leader, Nnamdi Kanu. They saw reasons with us and it is on record that the election went down the history of Anambra State as the most peaceful election in Anambra State. Therefore, I am of the opinion that the governors have not been tactful in their approach with the IPOB in allowing them give vent to their demands and taking appropriate measures to address their grievances,” the Ohaneze Youths Secretary said.

He continued; “They are no longer prioritizing the people’s interest. They represent themselves more than they cater for the people. If they do otherwise of all these, they will win the minds of the people.”

Okpalaezeukwu urged the IPOB to maintain their struggle for self-determination and shun violence to ensure that they sustain the goodwill they enjoy among the people of the Southeast.

According to him, adopting acts of violence will not only demean their reputation as an articulate and non-violent organization, but also extinguish the goodwill they enjoy among the people.

On his part, the National Vice President, National Youth Council of Nigeria, NYCN in charge of the Southeast zone, Comrade Nnonyelu Onyeibor queried the capacity of the governors to protect the citizens against the secessionist groups, lamenting that the problem of the Southeast is not the IPOB but the leaders.

He advised that government find a way to engage the IPOB, to be able to address their grievances.

“Because of our leaders’ interest in the national politics, they have paid a deaf ear to the happenings in their region. This is worrisome. I stand to say that IPOB has never been violent. So the governors should find a way to connect the people that elected them. We have a leadership problem in the Southeast and until the youths are involved in all the processes, I don’t see any headway,” he said.

Onyeibor queried the capacity of the governors to protect the citizens against the secessionist groups, lamenting that the problem of the Southeast is not the IPOB but the leaders.

“The governor of Anambra State was in the streets yesterday with heavy security. Many have died because they listened to the government so this time, people have understood that they are on their own and that’s why they cannot heed government directive,” he said.