Mavin Records CEO, Michael Collins popularly known as Don Jazzy has said one of the reasons why he blocks his followers on social media is when they make a negative comment about his former label mate and partner, D’banj or Mavin records act Korede Bello.

The Nigerian music producer in an interactive session with his fans on Twitter was replying a fan who was surprised that Banky W had blocked him despite never saying anything wrong to him.

Don Jazzy replied there is a possibility that he might have said some hurtful things to someone close to Banky W, maybe his wife Adesua Etomi or former protégée Skales. He told his fans to understand that entertainers are humans too with emotions and pick offense just like everyone else does.

He said “Most of the people i have blocked are people that said something bad bout dbanj or korede. so think well maybe u insulted skales or his wife. could be from any angle sir. we sef we be human beans hehe. yes beans” 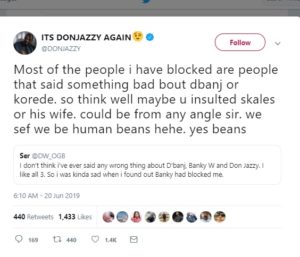 Don Jazzy and D’banj were former partners and formed Mo’Hits records before going their separate ways. Artistes like Wande Coal, K-Switch, Dr. Sid, D’Prince were under the label.