Sanwo-Olu: We Can’t Solve Our Security Challenges If… 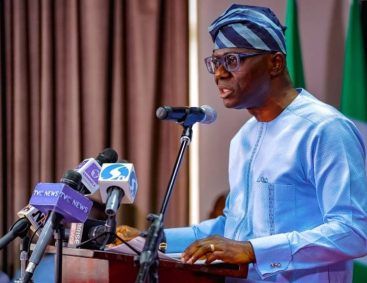 Governor Babajide Sanwo-Olu of Lagos State says the security challenges be-devilling Nigeria cannot be wished away so easily without a re-jig of the country’s twisted federalism.

According to him, allowing real federalism is the only way to put Nigeria on the path of accelerated development.

Sanwo-Olu says decentralization of some Exclusive functions of the Federal Government, including the provision of security, will provide instant answers to the current agitations threatening the unity of the country.

‘’The emergence of beggar-states as the major constituents of Nigeria’s federation will not take the country to the future it desires in a world that is developing rapidly’’, says the Lagos governor.

Continuing, he said, ‘’the flawed federalist ideals enshrined in the 1999 Constitution has continuously limited the power of states to pursue individual development at their own pace.

‘’Nigeria must holistically address the fundamental question of federalism if the political class is serious about lifting the country out of the current quagmire.’’

Sanwo-Olu was speaking on Tuesday while delivering a paper at the Freedom Online third annual lecture, with the theme: Nigeria: Foundation, Fundamentals, and Future.

Represented by his deputy, Dr. Obafemi Hamzat, at the event which held in Lagos, he recalled that Nigeria was administered efficiently during the period of the regional arrangement, pointing out that the feat was achieved because each region assumed autonomy on its resources and developed at its own paces without relying on handouts from the center.

‘’One of the legacies of military rule was the abolition of powerful and largely financially independent regional governments and replacement with weaker entities known as States. These States were, of course, beholden to a very powerful central government that doled out resources to them and used every opportunity to make it clear that the states were appendages of the center.

‘’At the time, the regions worked hard, earned their revenues from exports, from taxes, and so on, and kept a large chunk of what they earned. None of them came to Lagos – the then Federal Capital – with caps in hands for what we now refer to as Federal Allocation. Every region survived mainly on its internally generated revenue. There was also a healthy competition among the regions.

‘’The provision of security must be highly decentralized so that states must play a significant role in providing internal security, while the federal government faces the issue of defense, foreign policy, border controls, currency, and customs among others.’’

He argues that the central government must consciously devolve more responsibilities and resources to states and local governments as those entities are the closest to the people.

“States should be free to control the drilling of oil and mining of solid minerals and pay the required taxes and royalties to the Federation Account. Many states really have no business being poor or suffering a cash-crunch given their huge mineral deposits.

There is also no reason why states cannot generate and distribute electricity and license the same, within their geographical limits. This can be done in a way in which necessary returns will be made to the federal government”, he said.

Sanwo-Olu says no one should lose hope of a better future, observing that the ongoing revolution in the agricultural sector and investment in infrastructure by the President Muhammadu Buhari administration had started to gradually change the outlook of the national economy.

He said ongoing reforms in agriculture must continue to sustain non-oil revenue and reduce dependency on a single commodity economy.

“What is clear to me is that to achieve these reforms that we require, many of our laws need to change. We need to re-write and update obsolete laws to bring them in line with the realities of today.

“We must believe in what we produce, and encourage everyone who seeks to make a difference in this regard. We must also consume what we produce. One advantage we have is our population; we have a local market that is sufficient to sustain as much local produce as we can achieve. Many other countries are too small to enjoy this kind of privilege.”

The governor then calls for increased investment in technology and innovation, which he described as the magic wand Nigeria could employ to be on the same page with global development.

Also speaking, Publisher of Freedom Online, Gabriel Akinadewo, observes that Nigeria’s security challenges require the collective sacrifice of all citizens, stressing that the blame game among the ruling elite would not bring about a solution to the problem.

Akinadewo notes that the Nigeria Police Force was efficiently run until the collapse of the Second Republic when the degradation of the Police began.

“We cannot continue to use a central method to tackle challenges. We need a national conversation on the current situation as the political class is challenged. Nigeria cannot afford to lag behind while the world moves at speed in development”, says the publisher.