An American woman, Janine Sanchez Reimann, 46, has found the love of her life and is presently in Kano State to marry a 23-year-old Kano State indigene, Suleiman Isah.

Sahara Reporters noted that an invitation card they obtained has it that the Wedding Fatiha is to be held on Sunday, December 13, in the Gasau Panshekara area of Kano State. 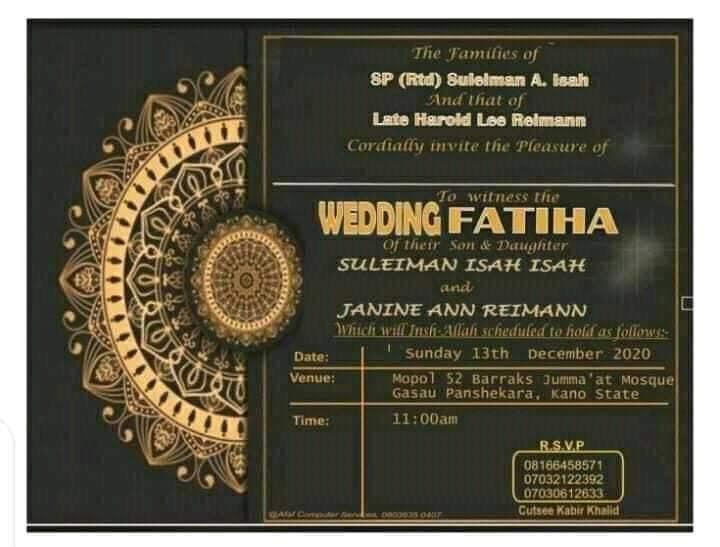 It would be recalled that the relationship trended earlier in the year on social media as many Nigerians expressed concerns over their age and race.

Reports have it that Janine is a chef based in Lindon, California. It was gathered that the woman said that she will not mind returning to America with her new love after the marriage in Kano.

Speaking on the development, a friend of the couple in Katsina State said they met on Instagram and started to date before they decided it would lead to marriage.

He said, “Suleiman has already shared the pre-wedding pictures with his American lover whom he met on Instagram. Sanchez (Janine) and Suleiman became friends over a year ago and fell in love with each other.

“She is a chef based in Lindon, California, and she has said she wouldn’t mind returning to America with her new love after the marriage in Kano. The wedding will take place Saturday 13, December at Panshekara.”

The development has starred up controversies on social media. While some individuals see no wrong with the development, others have contrary views. Below are some comments on Twitter.

@AdatuMuhammed If it’s were Nigeria lady or Northerner lady that dress like this or holding hands like this you would have had a lot of condemnation, from the Northerner include the boy family.

@AustinOBrian – The guy Don become US citizen sharp sharp. No more power outage, no more hunger, no more bad roads. Hope he won’t mess up with that White lady when he gets into USA. She is free to carry gun and he isn’t.

@lekanojumu – If the 23 year old guy is marrying a 46 year Nigerian woman, all hell will set loose. But because she is white and a green passport is attached to it, it is ‘right’. Thunder will fire all of you.

@trueAFICIONADO – If he’s from South East now, you will see some folks from the north calling him a criminal, but all I can see here is congratulatory comments. The truth is that hustle is not just about region. Well done my brother.

@sulaimon_akaji – Why is she not putting on hijab? bcos most northerners are hypocrite they always go against any woman with hijab or not covering her her why are dey sparing this woman. Please I need explaination.

@fatiyaks – Everybody including the man’s parent’s is applauding d union cos a “white woman” is involved and the man will most likely be “exported out” after the wedding. If it were a fellow Nigerian woman now, all hell will be let loose! Hypocrisy kee una there.