The Senator representing Anambra Central District in the National Assembly, Senator Uche Ekwnife has called on President Muhammadu Buhari to immediately commence reconstruction of Onitsha-Umueri-Nzam-Kogi road to ease the burden of traffic on the Enugu-Onitsha expressway.

Senator Uche Ekwunife made the call today when she inspected reconstruction work on Umunya- Amawbia axis of the Enugu-Onitsha expressway. 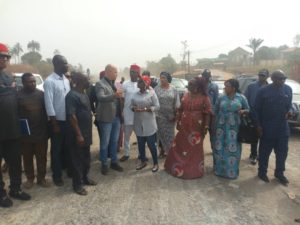 The project is an augmented part of the Enugu-Umunya reconstruction contract which was awarded last year, with a contract period of 42 months.During the visit, it was observed that the Umunya to Awkuzu axis has been fully completed while work was ongoing along the remaining stretch.

Ekwunife noted that the Enugu-Onitsha Expressway is so bad because it is the only major road leading to the southeast, adding that if the alternative road is not done, no matter how much government puts in repairing the Enugu-Onitsha road, it will dilapidate once the traffic is heavy. 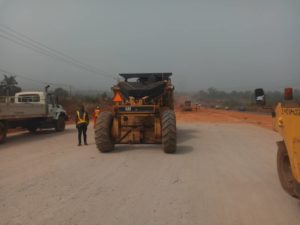 According to her, “Enugu-Onitsha Expressway is one of the busiest roads in Nigeria in terms of commerce and traffic. If this is the only road leading to the Southeast, it will affect its longevity. If the Onitsha-Umueri-Nzam-Kogi road is completed, it will be a legacy project for President Buhari.”On her visit to the site, Ekwunife said it was to see the progress of work on the Enugu-Onitsha expressway, adding that she is impressed not only with the reconstruction work but with the quality of work being done.The Federal Lawmaker commended President Buhari for awarding the job to a renowned contractor, noting that when completed, urging the contractor to sustain the tempo and quality of work to ensure that the project is delivered on schedule.“Looking at the quality of the road they are doing, I am convinced that it will last so I want to commend the contractor on the work they are doing. I also plead with them to complete the job before the next rains because according to forecast by meteorologists. I implore them to always confer with us as representatives of the people in the National Assembly, should they meet with any challenges. It is my avowed commitment to continue to pursue the people’s agenda,” Ekwunife said. 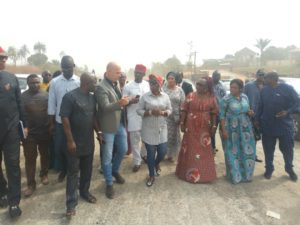 The Project Supervisor, Engineer Chidi Ezeala revealed that active work commenced April last year on the site, noting that they are targeting to complete the Enugu bound before the next rains.Ezeala said “there are no major challenges with this project, as the contractor is being paid as and when due and work is progressing according to plan. It is our hope that going with this present pace, this project will be delivered before the rainy season.”

Some road users who were overjoyed by the inspection visit, Chito Nwagu and Emeka Obi observed that with such efforts by the people’s representatives at supervising projects in their constituency, the issue of abandoned projects will soon be a thing of the past.