Hi ladies, so I’ll go ahead and list a couple of food items that can help boost your mood, give you that energy, and keep you healthy too.

We have dark chocolate, fish because it’s rich in Omega-3 fatty acids, yoghurt (if you are looking for a little sugar rush, you can have ice cream, not exactly a healthy choice but it does the job), bananas, berries, nuts et al., and the list is endless.

So why would anyone choose to indulge in placentophagy?

The placenta is an organ that delivers oxygen and nutrients from the mother’s blood to the fetus.

It also removes waste products from the baby’s blood.

The act, known as placentophagy, is simply the practice of consuming the placenta after birth.

Yes, the placenta is likened to a steak but do you know what else looks like a steak? Steak itself! All kinds of it.

Although there are no official estimates of how many women ingest their placenta, the Internet is increasingly crowded with placenta service providers, preparers of pills, smoothies and salves to support new mothers in the slog to recovery.

People usually decide to eat their placentas because they either previously had, or felt they were at risk of, a negative experience during birth and the post-partum period. Most commonly, these were women who had existing mental health problems or had previously experienced post-natal depression (PND) and were worried about a recurrence. PND can be an awful, isolating and stigmatized condition and people were willing to seek a broad range of possible preventative measures – including eating their placenta.

The rationale for this is that in the immediate postpartum period, the birthing parent experiences a large and sudden drop in pregnancy-related hormones that can result in low mood and energy. The placenta produces a lot of those hormones and so re-ingesting it could replace some of them.

This practice still seems alien in our culture as I was brought up to understand that the Placenta is buried and not ingested. 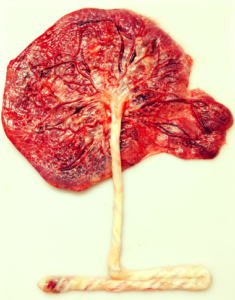 An obstetrician and gynaecologist, Dr Akinsola Akinde in a recent interview advised women against placentophagy.

“Medically, the placenta is a waste product because they are often colonised with bacteria. Many are infected.

“So, it is not advisable to eat something that is potentially teeming with bacteria, which may even be pathogenic.

“Some women may want to jump on the placenta-eating bandwagon because someone they know or respect claims it’s “the best thing ever”.

“I will advise them to exercise caution till scientific evidence proves that placentophagy is beneficial to human health,” he said.

He said that the placenta does have protein and fats, however, stressed that those nutrients could be found in a healthy diet.

Akinde stressed that placentophagy could be harmful to the mother and baby, noting that healthcare providers should be consulted about proven alternatives for postpartum and other concerns.

Rates of postpartum depression keep climbing, maternity leave policies are stingy, and child care costs are often prohibitive. It’s easy to see why many women would be eager to seek help, real or perceived, wherever they can find it.