As part of efforts aimed at ridding the State of touts, the Anambra State Ministry of Transport has arrested 15 illegal transport revenue collectors operating in parts of the commercial city of Onitsha.

The arrests were made during a raid of major black spots in the city, conducted in collaboration with the Focused Initiative against Touting (FIAT), a joint task force set up by the State Government late last year.

The persons were caught with fake receipts bearing Anambra state emblem, huge sums of money collected and other incriminating materials. 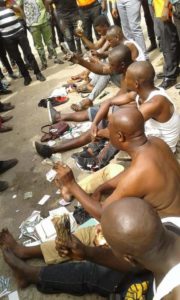 Touting has been a major challenge in Onitsha, the commercial nerve centre of the Southeast, resulting in severe security challenges especially at Upper Iweka, as well as a loss of huge revenue for Anambra State Government.

Speaking during the exercise, the Commissioner for Transport, Dr. Christian Madubuko who led the operation, said Onitsha is notorious for touting and collection of illegal tolls, which manifested during the Yuletide with lots of complaints.

This, he noted, necessitated the ministry to immediately swing into action and arrest the touts to put a stop to their negative activities.

“The activities of these touts are inimical to the efforts of the State Government at making the state safe for business and investors. The impression people have about Anambra is very important and for us to maintain our pole position in commerce and industry, we cannot allow such illegality as touting to continue,” Madubuko said.

He warned that business will not remain as usual for such touts, given the enormous revenue the state is losing and the menace they are causing, as those arrested will be tried and made to face the full wrath of the law.

According to him, the raid will be sustained in other parts of the state until the state is rid of touts and illegal revenue collectors.

The Head of FIAT, Mr. Okwudili Ohanazoeze, said the taskforce which drew its members from line security agencies and Ministries in the State, is visible in all twenty-one local government areas of the state. 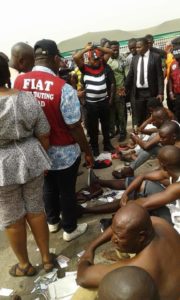 He said, “The government is committed to this project and that is why we believe that our mandate will be achieved. On our part, we have zero tolerance for touting and the attendant activities it brings and will work hard through intelligence activities to fish out, not just these touts, but also their sponsors.”

Some of the arrested touts, Obioma Chukwu, Igwe Leonard and Amobi Okeke, however, denied doing any wrong, while others said they were sent by some persons to collect the illegal money.

The arrested touts were later arraigned before a mobile court.