In this interview with Stanley Ugagbe, Emmanuel Akaolisa, Timilaemi Deinanaghan and Ngumimi Iyortsuun of The News Chronicle, The Chief Executive Officer of One Percent International Management Services, Stephanie Nnadi talks about why the entertainment company was established.

TNC: Thank you for finding time to have a chat with us. Can you share with us how One Percent International Management Services came into existence.

TNC: As a 360-degree media and entertainment company consisting of a music label, music licensing company, management consulting firm and event Management Company, how are you able to manage all of these?

Stephanie: We have a team that is capable. I have capable hands in the various departments while I oversee the affairs. Entertainment for me is new. The things that I do not know, I bring in people that are good at them. I have the eyes to put all the talents together to ensure that every aspect of the business works well. 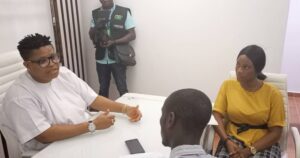 TNC: What attracted you to Platini P and how easy was it to strike a deal with him? Considering that he sings more in his language, how do you hope to create a balance in his songs to ensure that everyone is carried along?

Stephanie: First of all, music is global. You don’t have to understand the language before you can enjoy the rhythm. I am not properly into entertainment; passion is what is driving it now. We have done our homework or own work and we are big so then we said why don’t we bring Africa together through entertainment? His attraction for me is his person, charisma. When people are passionate about what they do, it has a way of selling naturally. When we started talking to him, I noticed that he is a man that says this and that is what it is.

TNC: Apart from Platini P, can you tell us about some other talents that have been on your radar, their performances, as well as how it is managing them?

Stephanie: We have worked with quite a number of artistes. We have Miss Alliance Isimbi aka Alliah, she is an A list actress signed on with us just like Platini P. But then, for me, everyone is a project; whether musician, actress or model and I have the talent to put all of these together and work with them individually. One Percent is there to bridge the gap and bring people together. We are gatekeepers, we have an eye to get talents and we ensure that we work with them individually. 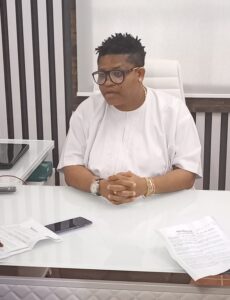 TNC: How do you recruit artistes? Is there something like a platform where any interested person can come to you, present their works and then you take it on from there?

Stephanie: It is not about recruiting; I go to people that are already big, people who know the craft and know what they are doing. For instance, Platini P wanted to come to Nigeria and was looking for that platform to project his music here in Nigeria; One Percent had to come in and that was how we signed him. So because I do not properly know the business yet, I’m not looking for upcoming talented people who are looking for a platform to project their music; I am looking for people that are already established and know the business so that when I’m probably going the wrong way, the person can say; no, this is how it is. After I have graduated from the school that I’m going through now, then I can start looking for people that I will train.

TNC: It is almost becoming a norm to promote nudity in music videos. Some people believe that this is what makes music sell in the 21st century. Yet, there is a growing worry among a few about moral decadence. Do you believe that without nudity, music cannot make impact or sell? How do we create a balance so that while we hope to optimize these semi-naked motion images of women, we also ensure that there is still some element of sanity in music videos?

Stephanie: I think it’s the time that we are in. People invest money into business and they’re like, how do I get my money back? And then they look at the screen and whatever is selling is definitely what they will key into. Nudity is what is selling because that is what the eyes want to see; that is what this generation is accepting right now. If you decide to come out and say I’m good and all of that, you won’t even get a like. But if you decide to go naked now, you will get one million followers in a matter of hours or even minutes. But we at One Percent are patient and we are following the process because it will pay off.

TNC: There is this belief in the public that upcoming female artistes have to sleep with music producers before they can be given the opportunity to showcase what they can do. How would you react to this?

Stephanie: It is not just in music, it is everywhere. Some people are just not human – they just want to take advantage of every situation and I see such people as small minded because you know this person is desperate and you want to ride on them. But if you know your craft, it might take you a while but it will eventually pay off if you take a stand not to sleep your way through. It is not just the females, it happens to men too. But the problem usually comes when you don’t know the right path to follow. If the people don’t have the fear of God, if they don’t care and are only concerned about reaping from their investments, they will make you do things you don’t want to do and it’s up to you. But in a nutshell, this is applicable to everything in life and the individual you meet.

TNC: What do you think can be done to checkmate this ill?

Stephanie: There is nothing to checkmate it; it is poverty that is happening. It comes down to the individuals involved. A girl walks into an office and then the manager looks at her documents and sees that she is qualified but overlooks all of that and then say it has to be a give and take thing; it is up to the girl to accept or reject. Most of the time, when these ladies look at their family background and how tough things are with them, they are pushed into doing what they don’t want to do.

TNC: The entertainment industry is very dynamic; the creativity, unpredictability and large followership, money and other opportunities, do you think there are still untapped aspects in entertainment that need to be brought to light through management establishments such as yours?

Stephanie: There is a lot that still needs to be tapped but I’m not going to reveal that to you because that will be my own niche.

TNC: What in your view are the challenges of talent management in Africa specifically and around the world too and how can these challenges be tackled?

Stephanie: The challenge is usually finance and support. If you have money, then it is game over.

TNC: If you had the power to change anything about the music industry, what will you change and why?

Stephanie: I will make sure the right people get the fund that is meant for them. Music is what a lot of countries are feeding on and we also need to get it right here in Nigeria and Africa.

TNC: What are we expecting from One Percent International Management Services next?

Stephanie: We are working on a project called Platini P. He has dropped his single now and we are expecting that the next one is going to be in November and his album will be out by January next year. The project is big but we are taking it one step at a time.

Arming Against China: The US Global Posture Review