Post Views: 46
In furtherance of his promise to improve the ease with which Judges record judicial proceedings, the Governor of Anambra State, Chief Willie Obiano has announced the procurement of twenty-five stenographic machines for the first batch of twenty-five courts across the state judiciary to hasten speedy recording of course proceedings.
Governor Obiano made the announcement when he attended an event to mark the commencement of the 2020- 2021 Anambra State Judicial Year held at Cathedral Church of St Faith, Awka.
The Governor expressed the desire to see the Anambra judiciary working steadfastly to reduce the congestion of cases and facilitate speedy trials. thereby ensuring quick dispensation of justice and discharge of inmates awaiting trials.
The Governor further announced the establishment of Juvenile Correctional and Rehabilitation facility at Umunze, Anambra State to ensure effective management and rehabilitation of young offenders so as to avoid mixing them up with hardened criminals.
Obiano expressed delight in joining the Chief Judge of Anambra State and members of the Judiciary in the commencement of the Legal Year.
“2020 has been a very difficult year given the scourge of Covid-19. We also had to deal with the impact of the well-intentioned #EndSars protest which had gone South when hoodlums hijacked the process. Fortunately, when my administration beckoned on our youths and Community leaders, they stood up to stem the tide of unnecessary carnage. The role of the judiciary has become more cumbersome due to the long period we lost due to these occurrences and there arose the need to support them to expedite action on processes at the courts,” he said.
Obiano commended the cordial relationship between the Judiciary and Legislature, noting that his administration takes the welfare of the Judiciary seriously in spite of the lean resources of the state as exemplified by the payment of salary, pension and gratuities.
Earlier in a homily, the Archbishop, Ecclesiastical Province of The Niger and Bishop of Awka, the Most Rev. Alexander Ibezim, reviewed the Gospel of Luke 18:1-9 which spoke on the parable of a Judge that does not fear God nor respect people, and the persistence of the widow who sought justice from him, noting that like the widow, the society is asking for justice.
He, therefore, advised the Judiciary, Executive and Legislature to work as a team to ensure fair dispensation of justice at all levels, stressing that justice cannot be obtained in an atmosphere of chaos.
He applauded the choice of the theme of the Legal Year, ” Administration of Justice in Contemporary Times: Appraisal and Challenges.”
According to the Archbishop, “we cannot lose hope or continue to live in fear because God is telling us not to lose hope. We have seen many deaths this year and a sickness we don’t know where it came from is wreaking havoc. But I am bringing a message of hope.
“God is looking for Judges that fear him, who will be fair to both poor and mighty at all times. I recommend self-determination through prayers, a re-examination of the relevance of some political offices, and the need to pay the price of leadership to ensure the sustainability of the system because if we continue to take from the system without putting-in, the system will die.”
In his Vote of thanks, Chief Judge of Anambra State, Hon Justice Onochie Anyachebelu thanked Governor Obiano, Archbishop Alexander Ibezim, distinguished justices, senior advocates and legal luminaries who graced the occasion. 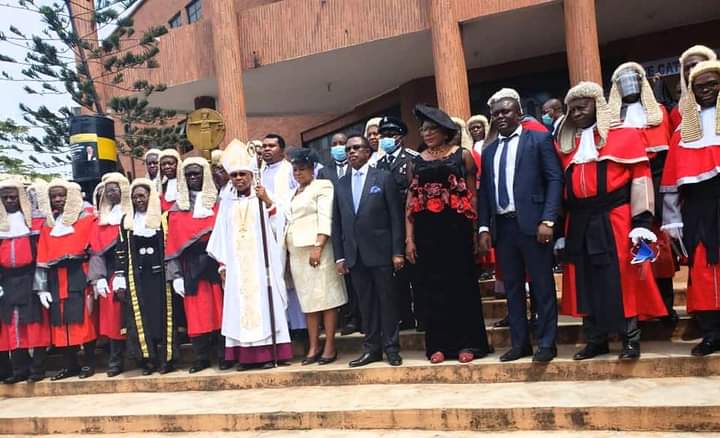