Post Views: 180
Anambra State Governor, Chief Willie Obiano, on Thursday presented a draft estimate of one hundred and forty-one point nine seven billion naira as Anambra’s 2022 budget proposal before the State House Assembly.
Out of the draft estimate based on realistic projections on all sources of revenue, Recurrent Expenditure was pegged sixty point nine billion naira representing 43 percent, while total Capital Expenditure is eight-one billion naira representing 67 percent of the total budget size.
A breakdown of the estimate shows that road works and infrastructure will gulp twenty three billion naira, agriculture will take three billion naira, while three point two three billion naira was budgeted for education.
Environment by the estimate is to take three point four two billion naira, Youth Empowerment and creative economy will take two point zero eight billion naira, five point eight billion naira will go to Health, one billion naira for small and medium enterprises while two point one billion naira is for water resources and public utilities.
Further breakdown reveals that Community social development program will get one point four billion naira to enable commencement of the third phase of the community choose-your-project initiative as well as provisions for disability programs.
Presenting the estimate, Governor Obiano said it is geared towards sustaining his performance over the last seven years.
According to him, he has no plans to increase taxes and levies in the coming year, to fund the budget.
The governor noted that due to the disruptions in the system, his government was able to achieve a budget performance rate of approximately 35.4% for the 2021 fiscal year.
He, however, assured of a return to normalcy in the latter periods of the current year, expressing optimism that the overall budget performance will improve to approximately 75%.
Giving a detailed account of his stewardship, Governor Obiano said he has remained committed to his administration’s vision and mission, despite daunting economic challenges and thanked the State legislature for partnering with him, just as he pleaded for expeditious passage of the budget. 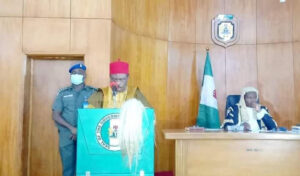 The Governor revealed that the budget is in tandem with the aspirations of Anambra vision 2070, having completed the planning, following series of stakeholders’ contributions, saying the plan will be launched soon.
The Speaker of the State House of Assembly, Uche Okafor, who presided over the proceedings commended the governor for keeping to the promise he made at last year’s presentation, to construct the Anambra International Cargo and Passenger Airport, Umueri which has been completed, as well as many provisions such as International Convention Center and Awka Capital Stadium, Awka which are nearing completion.
While assuring that the house will painstakingly look at the budget and come up with a legal framework that will satisfy the intent of the government and the development expectations of Anambrarians, the Speaker said governor Obiano’s administration has recorded tremendous achievements in human and infrastructural development, thereby making Anambra proud through his purposeful administration’s empowerment of thousands of ndi Anambra.
“This has resulted in an improved standard of living for the citizenry and development of the state.
“For this, we are ready to continue to partner with the executive arm of government through the passage of people-oriented and development-driven legislation among other statutory duties,” he said.
Secretary to the State Government, Professor Solo Chukwulobelu, Chief of Staff to the Governor, Mr. Primus Odili, Head of Service, Barrister Harry Uduh, Senator Victor Umeh, members of the State Executive Council, Traditional rulers, among others, attended the budget presentation. 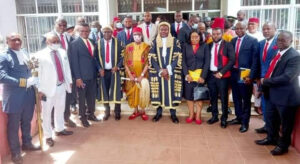