by Michael Jegede
in News
0

The Director-General of the National Institute for Hospitality and Tourism, NIHOTOUR, Nura Sani Kangiwa, has stated that the Memorandum of Understanding (MoU) signed between the Institute and the National Bureau of Statistics (NBS) is aimed at closing the existing data gap in the hospitality and tourism industry of the country.

Kangiwa, who stated this in Abuja during the signing ceremony of the MoU with the NBS, noted that it will further deepen the statistical development of the sectoral databank necessary for planning within the tourism and hospitality industry.

According to a press release signed by Mr. Ahmed Sule, Director of Media and Public Relations, the NIHOTOUR boss observed that Statistics are critical to national planning, sound policy development and informed business decisions.

He said because research is an integral part of Institute’s mandate, it becomes imperative to seek partnership with NBS as an exclusive agency in verifying, approving, administering and publishing basic national statistical data for national economic and social development.

He further stated that for NIHOTOUR to effectively carry out its mandate as a research and allied institution saddled with the responsibility of the training of manpower needs in the Hospitality and Tourism industry as well as Coordinator of the Sector Skill Council in Nigeria, the Institute has established a vibrant Research and Development Unit to conduct industry-based research and generate data for the use of the industry, noting that partnership with NBS will fast-track the duties and functions of the Unit.

While he expressed his appreciation for the positive response and prompt action of the Bureau in ensuring a comprehensive package of the MoU, Kangiwa called for better synergy, cooperation and understanding in the successful implementation of the agreement for the benefit of the two agencies particularly in the discharge of their mandates, and for the socio-economic benefits of the country in general.

In his remarks at the occasion, the Statistician General of the Federation, Dr. Simon B. Harry, reiterated the relevance of data in policy formulation and implementation for national growth and development, assuring that NBS is prepared to work assiduously with NIHOTOUR in its efforts at addressing the dearth of accurate data in the nation’s hospitality and tourism industry. 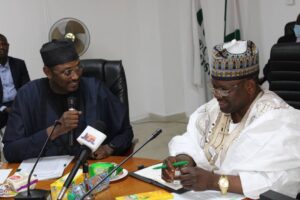 Dr. Harry who observed that the absence of accurate data has been the bane for the abysmal performance of sectoral industrial growth and development, further noted that figures and information gathered cannot be said to be usable data until they are found to be accurate, verifiable, accessible, and available for user needs which essentially is what the Bureau intends to achieve for all sectors of the country.

He stated that the partnership between the Bureau and NIHOTOUR is a welcome development, adding that he looks forward to more of such partnerships with other Ministries, Agencies and Departments in the public sector as well as the Organized Private Sector for the general and overall growth and development of the country.

Management staff of both Agencies who were at hand to witness the signing ceremony of the MoU, expressed happiness for the synergy saying it will improve Inter-Ministerial, Department and Agency relations of the public sector of the country.