The facts are there, Nigeria’s economy has never witnessed sustained growth better than under former president Olusegun Obasanjo. In 1999 under his first term growth was only at the rate of 0.58%, but by 2002 we were experiencing growth rates of 15.33%.

Even China did not record such breakneck speed of growth, and then, there are the reforms and the management of foreign reserves. Also, there was the debt servicing of which at a point towards the end of his 2nd tenure when close to 0 Naira was recorded as debt profile of the country. Closest to sustained growth in GDP terms to Obasanjo was Yaradua’s regime which witnessed growth rates of 6.76% and peaked at 9.13% in 2010.

Sadly, from then on, the countries growth trajectory continued to take a hit and dwindled from 5.31% in 2011 to 4.80% in 2014 under Jonathan and then a Buhari came in 2015. We were so full of enthusiasm but were disappointed after a while. Reason being that the price of crude oil (brent or otherwise) had collapsed to an all-time low of just $25. As a result, under Buhari the average growth projection for Nigeria was estimated to be at a marginal 0.31% due to factors like 1.bad policy in the case of border closures and then 2. there is the pandemic and its effects on global and regional trade of which by this year 2021 the growth projection is 1.98% and then by 2023 it will be at 2.3% (keep in mind Nigeria entered and exited recession twice in the past 7 years). 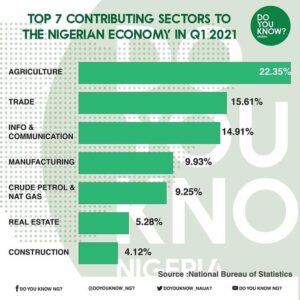 Moving from the bleak picture above, there is cause for optimism. The image attached to this post shows a diversified economy and the contributions of each sector to the Nigerian economy… In Quarter 1 of the year 2021, it is shown that agriculture had produced the highest contribution to Nigeria’s economy 22.3%. Coupled with this is growing trade, 15.61%, the Pantami revolution in the ICT and information technologies 14.91%, manufacturing sector approximately 10% and then you have crude oil 9.25%, real estate 5.28% and construction industries 4.12%…

This trajectory shows that indeed the economy is being diversified and that it is due to this that the country got out of its most recent recession. If this is sustained, then perhaps the nation’s future, albeit economically, is not as bleak as thought.