by Kenechukwu Ofomah
in Business & Economy
0

The Federal Government has been urged to fully explore the potentials that abound in the Agricultural Sector, to open up multiple foreign exchange earning avenues for Nigeria.

The traditional ruler of Ifite-Ogwari in Ayamelum Local Government Area of Anambra State, Igwe Alphonsus Ofuebe, who made the call during the celebration of the 2021 New Yam Festival of Ifite-Ogwari community, said only by providing farmers with the necessary support, will Nigeria achieve this. 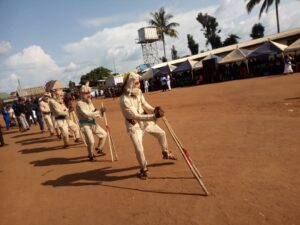 The festival celebrated in a spectacular way, witnessed the conferment of  awards  on the Speaker, Anambra State House of Assembly, Rt. Hon. Uche Okafor and other illustrious sons of the Community by the traditional ruler, for their outstanding contributions for development of the Community.

Igwe Ofuebe, while performing the symbolic cutting of roasted new yam, acknowledged that although the Federal Government had done something towards empowering the farmers in the area, a lot still needs to be done to better the lot of Nigerian farmers.

“Agriculture is a very important aspect that has the capacity not only to create alternative sources of foreign exchange earnings for the country, but also to create jobs for youths and ensure food sufficiency.

“With good food and its availability, many health challenges can be addressed and our people will live healthier and fuller lives.

“This is why the government should look towards supporting farmers more to boost their production,” the monarch advised.

Igwe Ofuebe who told people of the community, especially the youths to working towards living a healthy lifestyle devoid of all forms of social vices, also underscored the importance of peace and order in the development of any nation.

He tasked the Government at the Centre with expediting actions towards restoration of peace and orderliness in parts of the country, with agro-potentials, where the issue of herders/farmers clashes have prevented optimum production..

The Ifite Ogwari king described the New Yam celebration as a significant event in Igboland, using the occasion to pray for the progress of Ifite-Ogwari Community and the entire Ayamelum Local Government Area, while challenging the people to say no to illicit drugs and narcotic substance that are  capable of ruining human life.

In a goodwill message after receiving an award from the traditional ruler, the Speaker, Anambra State House of Assembly, Right Hon Okafor, thanked Igwe Ofuebe and his cabinet members, for the honour they accorded him.

He also extoled the monarch and the custodians of the community’s culture and tradition, for their efforts towards sustaining the age-long culture and tradition of  Ifiti-Ogwari, adding that the New Yam celebration is an occasion used by the Igbo community, to thank the gods for bountiful harvest.

He assured that the State House of Assembly is tackling most of the challenges facing the State through the immeasurable assistance of the State Executive.

“The House is doing everything within its powers to expedite action towards passing the executive bill on anti-open grazing  into a law as soon as possible and send the same to the State Governor, for his accent,” he revealed.

In their separate remarks, the President- General of the Ifite-Ogwari Improvement Union, Chief Barrister Okonkwo; his predecessor, Chief Chukwudi Ekwunife and the Deputy President-General, Chief Nwaorji Ikeozara, described the community as one of the food baskets of the country, regretting the  dilapidated condition of the Onitsha- Otuocha-Adani Federal road and other feeder roads in the area which they said hamper the smooth evacuation of farm produce from the area to urban cities for sales.

The Vice – Chancellor, Nnamdi Azikiwe University, Awka, Prof Charles Osimone, who was represented on the occasion by the Dean, Faculty of Agriculture, Ifite- Ogwari, Prof Theresa Nkeru Meludu, said that the celebration of New Yam Festival in Igbo land is a period of thanksgiving for God’s benevolence, especially the gift of life and bumper harvest as well as an opportunity to ask for His blessing for the people to celebrate the New Yam next year and prayed God to bless Igwe  Ofuebe with long life and prosperity as his throne lasts.

Special performances by Nwaugwu, Izaga and Asato masquerades as well as litanies of various degrees of cultural dances by the people of the Community added glamour to the event.

Cathy Smith of SAP Africa Scores a Spot on the Africa.com Definitive List of Women CEOs of the Biggest & Most Complex Businesses in Africa

Private Investment in Africa is Exceeding Expectations in 2021, According to New AVCA Report