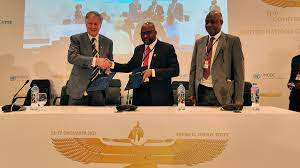 Nigeria’s Independent Corrupt Practices and Other Related Offences Commission (ICPC) has signed two Memorandums of Understanding (MoU) with the State of Palestine’s Anti-Corruption Commission and the International Anti-Corruption Academy (IACA) based in Laxenburg, Austria.

The agreements are part of measures by the ICPC to enhance its fight against corruption in the country.

The Chairman of the ICPC, Prof. Bolaji Owasanoye, SAN, signed the two agreements on behalf of Nigeria while the Commissioner of the Anti-Corruption Commission of the State of Palestine, Mr. Raed Radwan, signed for his country and the Dean of IACA, Thomas Stelzer, signed for his organisation.

The signing of the agreements is part of the side events at the ongoing Ninth Session of the Conference of the States Parties (CoSP9) to the United Nations Convention Against Corruption (UNCAC) organised by the United Nations Office on Drugs and Crime (UNODC) at the International Conference Centre in Sharm El-Sheikh, Egypt.

The ICPC boss, in his remarks at the signing ceremony, expressed his delight at the culmination of one-year discussions with the Anti-Corruption Commission of the State of Palestine on the fight against corruption.

He said, “This agreement has been approved by the Federal Ministries of Justice and Foreign Affairs. It seeks to identify areas of cooperation and coordination between the two parties in the field of preventing and combating corruption in accordance with the principles and objectives set out in the United Nations Convention Against Corruption.

“The two organisations shall, in accordance with the legal systems of their respective countries, cooperate and coordinate in the field of prevention and combat of corruption by studying the factors and conditions encouraging their practice, measuring and assessing their risks and the most appropriate ways to combat it.”

Prof. Owasanoye, who likened corruption to Covid-19 pandemic, averred that corruption is perilous and doesn’t spare anyone and countries.

He advocated international and regional collaborations between organisations and countries towards addressing the menace.

The Commissioner of the Anti-Corruption Commission of the State of Palestine, Mr. Raed Radwan, also conveyed the pleasure of the organisation and country to the signing of agreement with ICPC.

“We are very happy to sign this agreement and to benefit from Nigeria’s experience in anti-corruption. We will light to express our pleasure to Nigeria and ICPC for making this MoU come to realization.

“We are fully aware of the many challenges in combating corruption, and we hope that the MoU will greatly assist to confront and address corruption in our respective countries. Both organisations have received strong political backing from The Presidency towards this agreement,” said Radwan.

In a related development, the ICPC also signed a Memorandum of Understanding with the International Anti-Corruption Academy (IACA), an international organization and centre of excellence in the field of anti-corruption education, training, networking, cooperation, and academic research, with its seat in Laxenburg, Austria

The ICPC Chairman stated that the agreement had become necessary due to the seriousness of the multi-dimensional threats posed by corruption to societies, undermining institutions of governance, ethical values and justice, and jeopardizing sustainable development, social and economic prosperity, and the rule of law, including the full enjoyment of human rights.

He noted that prevention and combating of corruption can be substantially enhanced by international cooperation, involving all sectors of society, including the corporate sector, individuals, as well as civil society and non-governmental organizations, through sharing knowledge and expertise, as well as other joint efforts at the global and regional levels in support of the UNCAC and other relevant instruments.

The ICPC and the IACA have agreed to explore, develop and strengthen their collaborative efforts and cooperation in the field of anti-corruption training and research, particularly by creating a strong partnership that will enhance the sharing of anti-corruption knowledge and expertise between them and other stakeholders.