As part of efforts to ensure peaceful and hitch-free New Year celebrations in Anambra State, the State Police Command has deployed special Cross Over Patrol Teams across all parts of the state.

Addressing the teams today at the State Police Command headquarters in Awka shortly before take-off, the Anambra State Commissioner of Police, John Abang said the initiative is to consolidate on the security gains of the Christmas Period. 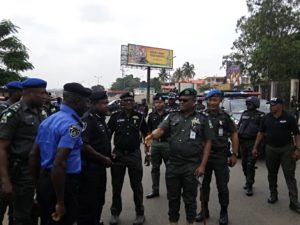 He further revealed that the aim of the Operation is to ensure that citizens and residents of Anambra State State celebrate the New year peacefully without any threat to their lives and properties.

Abang implored officers and Men participating in the operation to be professional and Civil to members of the Public when discharging their duties in accordance with internationally acceptable best practices.

“I wish all Anambrarians and residents alike a prosperous New Year celebrations and assure them that the Command will sustain its efforts towards providing safety and security in the State before, during and after the new year celebrations. The Public are enjoined to contact the Command emergency center in case of any distress for prompt response,” he concluded.