by Richard Odusanya
in Opinions
0

Turning adversity into advantage is the moral compass and currency of victory in the journey of life. We must always be prepared and ready to face the challenges and tough times. Adversity allows us the very important character trait of resilience. Through resilience, one is able to be bolder and more level headed, one’s character is strengthened and one is able to move on from very painful circumstances. 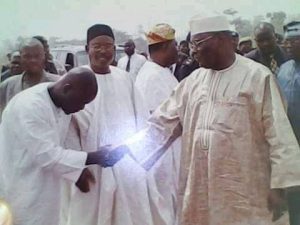 Similarly, resilience and determination helps us to overcome challenges. Life is full of challenges. Some people seem to meet every challenge with confidence, while others struggle to overcome them. This made my mind flash back to some years ago, between the later part of 2004 and the first quarter of 2005 when I was privileged to be in a meeting with His Excellency, Vice-president Atiku Abubakar, as he then was, and some American delegation. As the meeting progressed, the then vice president, in his characteristic way, after some pleasantries, inquired from one of the Americans, what the situation and the likely outcome of the election in America as of that time was going to be. One of the Americans responded by saying, “It is going to be tough” after a very long analysis laced with a very heavy American accent.

His Excellency, the vice-president, as he then was, did not see anything strange about a tough situation as enunciated by one of the members of the delegation at the meeting. In his words, he had said; “I am usually more at home with tough situations, because that is when I am assured of victory.” He then further explained to us, what he meant by “Tough situations are part of the game of life”. He said that; “growing up as an orphan with a detached father in a verbally and physically abusive environment, I felt like I missed out on being a child. We were very poor and lived in a house without electricity or water. We lit oil lamps for light and looked for water from…to feed our cattles and for our daily use. Half of the house’s roof was gone so, when it rained, we set out pots for the leaks. In my helplessness, I cried for the day when my father denied me the opportunity to go to school, until he was sent to prison…. and that, through it all, I was determined to get the western education, which made me who I am today.”

Lekki Toll Gate Massacre And A Country In Darkness

Borrowing Against The Law

Interestingly, as we all listened to him with sorbed and pin drop silence, I was particularly touched hearing from a man who inspires confidence in me. I said to myself, “I will never run away from challenges”. I learnt that from ‘Cicero’ Chief Ajibola Ige of the blessed memory and now part of my take away from that executive meeting is that,  “I will never be afraid of adversity”. In my mind,  that experience explained how visualizing the future has always been the attribute of great minds. Those who can visualize their glorious future ignore the present obstacles in their way, forging ahead to reach their goals. The pains of today become the springboard for tomorrow’s elevation.

On the other hand, it also speaks to our situation and circumstances as people and a nation at a crossroad. We need to draw strength and inspiration for the golden years; we need to reconsider our approaches to issues; we need to understand that it is better to jaw-jaw than war. It is my candid opinion that what peace cannot achieve, violence can not. Voluntary ignorance is a weakness that subjugates the mind of the wise and even powerful men to accept destructive indoctrination. It is better to be physically challenged than to be mentally challenged. So, therefore, when I see people saying the same thing like programmed robots…I take my time to study the circumstances and situations very well before I take a stand. Somebody once said that, “When emotions are running high, reasoning takes flight.”

Conclusively, as we continue with the submission and cognitive dissonance to the mind restructuring advocacy, we need to open our minds to the possibilities and gains of brotherhood. Because eyes are useless when the mind is blind. NIGERIA NEEDS A NEW NATIONAL MODEL…. ARISE ‘O COMPATRIOTS.

Lekki Toll Gate Massacre And A Country In Darkness

Borrowing Against The Law

Inherent Powers Of Court: A Tool For Achieving Justice In A Suit

Osun: a future in the making?

Fuel Subsidy Removal and the Concept of Change