Onitsha – Popular Nollywood actor, Chinwetalu Agu was on Thursday allegedly physically assaulted and whisked away at Upper Iweka, Onitsha, by men of the Nigerian Army.

A video that went viral online today, showed the veteran actor dressed in Biafran overall, with his van parked in the middle of the road. 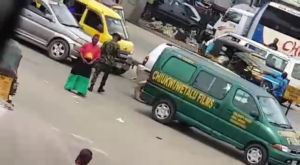 Armed men dressed in military clothes were seen moving round the van before dragging him on the tarred road, as people drive past.
One of the suspected soldiers was also hitting and kicking the actor before he was alleged to have been taken away.

There were also gunshots that caused panic as onlookers scampered for safety.

While there was no audio in the video stating what happened, some persons who our correspondent contacted, said the actor was beaten because he was dressed in biafran attire.

Efforts to get the spokesperson of the 302 Artillery Regiment of the Nigerian Army to comment on the incident, was unsuccessful as at the time of filing the report.