One of the traders whose shops were over the weekend razed by fire at Old Automobile spare parts Mgbuka Market, Obosi, has reportedly died.

The victim, Goodwill Edoziuno who is the chairman of one of the affected lines, was said to have collapsed upon seeing the disaster wrecked by the inferno which happened early Saturday.

The Late Edoziuno was immediately rushed to the hospital but eventually gave up the ghost.

Recall that an initial report by the Police on the fire incident had acknowledged that one of the affected traders had slumped at the market but said no life was lost as a result of the fire. 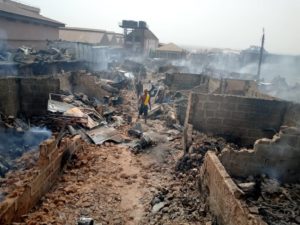 Some traders affected by the fire who confirmed the sad news to newsmen today said the victim was healthy as at the time of market closure on Friday.

One of the affected traders, Goddy Nweke recalled how the victim was summoned and he had arrived at the market where he met his boys moving things from the fire and then slumped immediately.

“He probably may have suffered heart attack as a result of the destruction he saw. This is really a disaster,” said Nweke.

Nweke whose three shops were completely burnt down said he lost over #10 million to the inferno, calling on government and other spirited individuals to come to their rescue.

According to him, “we bought the land and built the shops ourselves so we lost so much. I was once a victim of this kind of incident in 2008 and again this year. I really pray that the government will genuinely come to our rescue at this time”.

Another affected trader, Ifeanyi Nwuwa, said he just wedded September, last year and has not recovered fully from the expenses, only to meet the misfortune this year.