Ozubulu, a town in Ekwusiugo local government area of Anambra state is one that can be easily called a sophisticated art. Its rich history, culture, enterprise and dynamic personalities continue to speak for it at home and even beyond the shores of the African continent.

Ozubulu is still among the towns that are lucky enough to retain its original Igbo name without corruption. The corruption came from the fact that Igbo people could not put their thoughts and language in writings properly before the white man came. In his coming, he used interpreters who themselves were not vast in the Igbo language, and thus there were minor and major drifting in the original pronunciation and writing of Igbo words.

Ozubulu is made up of four villages: Amakwa, Egbema, Eziora and Nza. They each have different festivals that precede the popularly known new yam festival.

Iku Izu is the festival held by the Eziora community of Ozubulu where youths engage in the Egede (a cultural) dance and move from house to house from evening till midnight.

From another point of view;

“ora” means people, everyone, everybody.

Zi, also means to show, to lead, to guide.

Zi ora means show all, guide all, lead all.

In this context therefore, Eziora is the torch bearer, the light bearer. 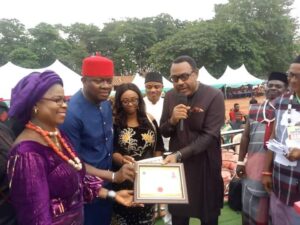 Through the Iku Izu there is also a process of enculturation and acculturation among the people, young and old. Local customs and traditions are taught and recalled among the people, they also welcome foreign cultures which they ascertain will be for the good of the community and humanity at large. Another aspect of the enculturation is a communal introspection on practices or beliefs they may discover to be inimical to the development of the society, and if any is found, they drop such old practices and beliefs.

Part of the discussions this year was on the “ancient” appellation attached when the Ozubulu kingdom is being described. The word ancient and kingdom were defined, like Rome, Egypt and Britain in the past, and then they checked the state of Ozubulu today to see how it fits into the description of an ancient kingdom. So, in what modern sense can we refer to Ozubulu, as ANCIENT KINGDOM?

Also the usage of Obi or Eze to refer to the head or king of the community was also considered. Ozubulu at earlier times used the Obi title until as part of it acculturation process, it adopted the use of Eze as other neighboring towns.

The IKU IZU EZIORA thus has continued to serve as a revival and sustenance of our culture.This year’s event is a step in the right direction. We plan to step it up to an international annual carnival in order to harness the tourist potentials of the event.