“I feel complete as a man now,” says Prosper as he takes his bride home

For Osomohwo Prosper Oterai, an officer with the Nigerian Army, Saturday 3rd of July 2021 was not just a dream come true but a culmination of what he described as the perfection of God’s handiwork in his life.

It was on that day that he cemented his love with his long-time heartthrob, Evi Mercy Eti, officially making both of them husband and wife.

The marriage ceremony was held at Igbide community in Isoko South Local Government Area of Delta State, the hometown of both the bride and the groom. 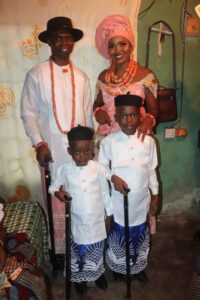 In the dignitary-laden event, Osomohwo and Evi dazzled their guests in what some described as a pure celebration of true love.

Speaking with a correspondent of The News Chronicle, Osomohwo said “I am so excited and grateful to God for making it possible for me to finally get married to my sweetheart, the woman who completes me”.

On how long he has known her, Osomohwo said “I have known my wife for about 11 years and it’s been a wonderful journey with her. She is a wonderful person with a beautiful heart”. 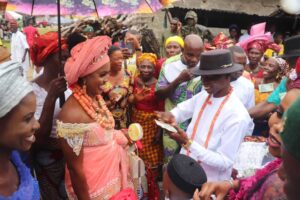 When asked why he opted for her, the elated Prosper said “It was her character and beauty that attracted her to me. Sincerely speaking, she exudes the kind of beautiful attitude that is rare in present-day society. She is everything I want in a woman and I love her so much”.

The joyful Osomohwo, while reminiscing on the 11-year-long courtship before finally cementing their affair, said “I feel complete as a man now, I am not a bachelor again and I can now be addressed as Mr.”

WHO: Nigeria, 29 Other Countries Have Highest TB Burden, It Killed 1.5 Million People in 2020