The group made the call during its South-East Climate Strike and Green Walk, with the sub-theme, “Clean-up Enugu’’ held on Saturday along major roads and streets within Enugu metropolis.

The members of POP, who evacuated refuse on the roads, also displayed placards with inscriptions such as, “There is No Planet B’’, “Climate Justice Now’’ and “Recycle Don’t Waste’’ among others.

The POP movement is being supported by the Federal Ministry of Environment.

Speaking after the exercise, the Country Representative of POP, Mr Samuel Okorie, said the essence of the walk and sanitation was to educate the residents of South-East that climate change is real and to imbibe good climate habits. 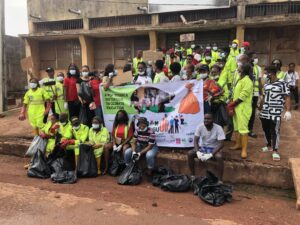 According to him, “we are raising the consciousness of people in the South-East on climate issues, which is already affecting them through numerous erosion sites, extinction of some native crops and excessive heat.”

Okorie called on Nigerians to jettison practices that degrade the climate and environment but to embrace positive environmental and climatic protection practices to stem the tide of climate change.

“Nigerians must stop indiscriminate felling of tress, bush burning, dumping of refuse on drains/ waterways, dumping of industrial chemicals on waterways and streams and building on waterways etc,’’ he said.

The POP country representative challenged residents of the South-East on taking practical actions to support good climate and environmental practices.

“We just need one person to take just one positive action to protect our environment and such deeds we add to efforts to revise the current climate change,’’ he said.

In his remarks, the Executive Director, Town Crier Initiative Africa, Mr Ogene Ogbodo, said that it was time for Nigerians to rise and reverse all negative habits that had brought climate change development to the country.

“We must not wait until current negative climate change developments wipe us out of the country. Time for positive action is now,’’ Ogbodo said.