by Emmanuel Anthony
in News, Politics
0 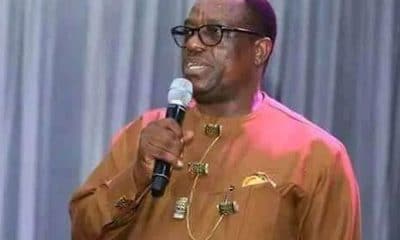 The acting national chairman of the dissolved National Working Committee (NWC) of the All Progressive Congress (APC), Mr Victor Giadom, has reacted to the decision of the National Executive Council (NEC) to dissolve the NWC saying; “there is No Victor, No Vanquished.”

Giadom in a press statement on Thursday said he stood by his initial stance of being contented with “the outcome of today’s APC NEC meeting.”

“I had earlier said that the collective decision of the entire NEC will prevail in today’s meeting. I also promised to stand by any decision decided.

“…There is No Victor, No Vanquished. The Togetherness and cohesion Of Our Great Party Has Always Been Our Prayers.”

President Muhammadu Buhari had on Wednesday endorsed Giadom as the eligible person for the acting national chairman position following the suspension of Comrade Adams Oshiomhole.

A statement confirming the President’s endorsement and made available to the media by the Senior Special Assistant to the President on Media and Publicity, Mallam Garba Shehu in Abuja on Wednesday said, “the President has received very convincing advice on the position of the law as far as the situation in the party is concerned and has determined that the law is on the side of Victor Giadom as Acting National Chairman.” However, the party’s NEC to mitigate damages the power tussle in the party has caused, considered dissolving the NWC and in place constituted Caretaker Committee and Extra-Ordinary Convention Planning Committee.

Meanwhile, a former Minister of Information, Chief Tony Momoh, said the National Executive Council of the All Progressives Congress (APC) has not acted strangely by dissolving the party’s National Working Committee.

Momoh, also a chieftain of the party, made the assertion in an interview with newsmen in Lagos on Thursday.

Reacting, Momoh said the party’s NEC had the constitutional powers to dissolve the NWC.

He explained that NEC could take such decisions when some pending issues in the party could not be resolved by the NWC of the party.

The former minister, however, said it was not for him to say whether the dissolution was good for the progress of the party or not.

“What the NEC has done is not strange; They have the constitutional powers to dissolve the NWC and what they have just done is to exercise that power.

“In the party’s hierarchy, the NEC is higher, so it can take certain decisions that will be binding on NWC; again such decisions will have to be ratified by the party’s convention.

“So, I can’t say whether the dissolution is good or not, but what is clear is that the NEC can take decisions to resolve lingering issues in the party,” he said.