What better way to herald the approaching award season than with the GRM Rated Awards? The award show, which is essentially a celebration of UK rap and grime, returned with a resounding bang.

The awards took place virtually this year due to the ongoing COVID-19 pandemic, and recognised some of the scene’s biggest names and their contribution to UK music between June 1 2019 to June 1 2020.

Rapper Central Cee was among one of the biggest winners of the night as he picked up both Male Artist of the Year and Breakthrough of the Year, but the prestigious Album of the Year went to Ghetts for his record, ‘Conflict of Interest’. The album was produced by Tj Amadi, one of the rising producers in the British charts.

The veteran rapper has had quite a remarkable year with the critical and commercial success of the album. Thanks to his telepathic partnership with executive producer TJ 2%, Ghetts was able to craft a timeless rap classic brimming with all the dynamism he is famed for. 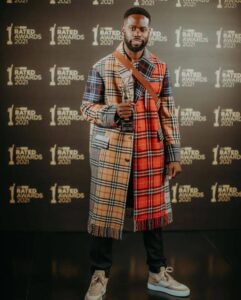 Ghetts’ success is particularly special because of the quality he embedded in the project. With TJ 2% by his side, his vision gloriously shines through on songs like “Skeng Man” where ominous strings and horns compel the listener.

‘Conflict of Interest’ isn’t just rap; it’s high art.
Other awards won on the night include Jorja Smith scooping up Female Artiste of the Year. YouTuber Niko Omilana was the winner of the Personality of the Year trophy, while two awards – Track of the Year and Video of the Year – went to Tion Wayne and Russ Millions for their single, ‘Body’.

Heartless Crew took home the Legacy Award, while M1OnTheBeat was named Producer of the Year and Radio DJ of the Year went to Charlie Sloth.

The award ceremony was hosted by Michael Dapaah and Jourdan Dunn, who took over from regular host Idris Elba.