Post Views: 10
It promises to be a memorable yuletide season for the 15 communities of Orumba South Local Government Area of Anambra State as a non-government organization, Prince Onyendozi Foundation on Thursday unveiled its Football tournament for the Council area.
The Football Tournament, which will span from the first week of December, 2020, to the first week of January, 2021, will see the first-placed teams win the price money of 500,000 naira, second place- 300, 000 naira and third place- 200,000 naira.
The sum of 50,000 has also been set aside for the highest goal scorer/golden booth, while all the participating teams, will get a consolation prize of 20,000 each.
Speaking at the unveiling of the tournament in Awka today, the Founder/Chief Executive Officer of the Foundation, Prince Nnanyerugo Ike, explained that the competition which is in furtherance of efforts at advancing grassroots sports in Anambra State, is also to create a platform through which football talents of youths in the area can be harnessed.
“The 2020 Prince Onyendozi Football tournament is a project we evolved through which we intend to give vent to the budding football talents in Orumba South LGA. There is no gainsaying that many Nigerians have found viable avenues for income and livelihood in sports and sporting activities and football has proven to be a major one in this regard. The likes of Kanu Nwankwo, Jay Jay Okocha, Mikel Obi, Kelechi Iheanacho, Wilfred Ndidi, are just a few of the names among the many Igbo sons, who have found their feet in the soccer business. What I intend to achieve with this tournament, is a platform through which we can give expression to the talents of our young people in the football business,” he said.
Prince Ike said the Foundation has extended partnership proposals to scouting agents and companies, who will be coming for the tournament, adding that players who distinguish themselves creditably may eventually get to be picked.
He also spoke on his decision to set up the foundation and what his intentions are.
“Prince Onyendozi Foundation is a non-governmental organization, which I established, as a platform to provide succour and assistance to our people across various spheres. It is on record that since its inception, the foundation has touched not less than a thousand lives through many of its interventions in the areas of education, health, sports development, youths empowerment and skills acquisition, among others.
“During the COVID-19 pandemic, the Foundation launched an initiative under which it provided relief materials to many households in Orumba South Council Area.
“Presently, we are undertaking our 2020 Medical Outreach for the 15 communities of Orumba South, which we flagged off on the 7th of November (last Saturday). This outreach which we run in partnership with medical doctors, pharmacists, laboratory scientists and nurses, is aimed at addressing the numerous health challenges of our people. Also during the Medical Outreach, the Foundation has undertaken to enrol 40 persons from Orumba South LGA, under the Anambra State Health Insurance Scheme (ASHIA), to enjoy free medicare for a period of twelve months (One Year),” he revealed.
Ike emphasized that his decision to float the foundation was borne out of the agreement he had with God, maintaining that though he is not the richest man in his community, Ezira, he believes in one doing what God has called them to do. 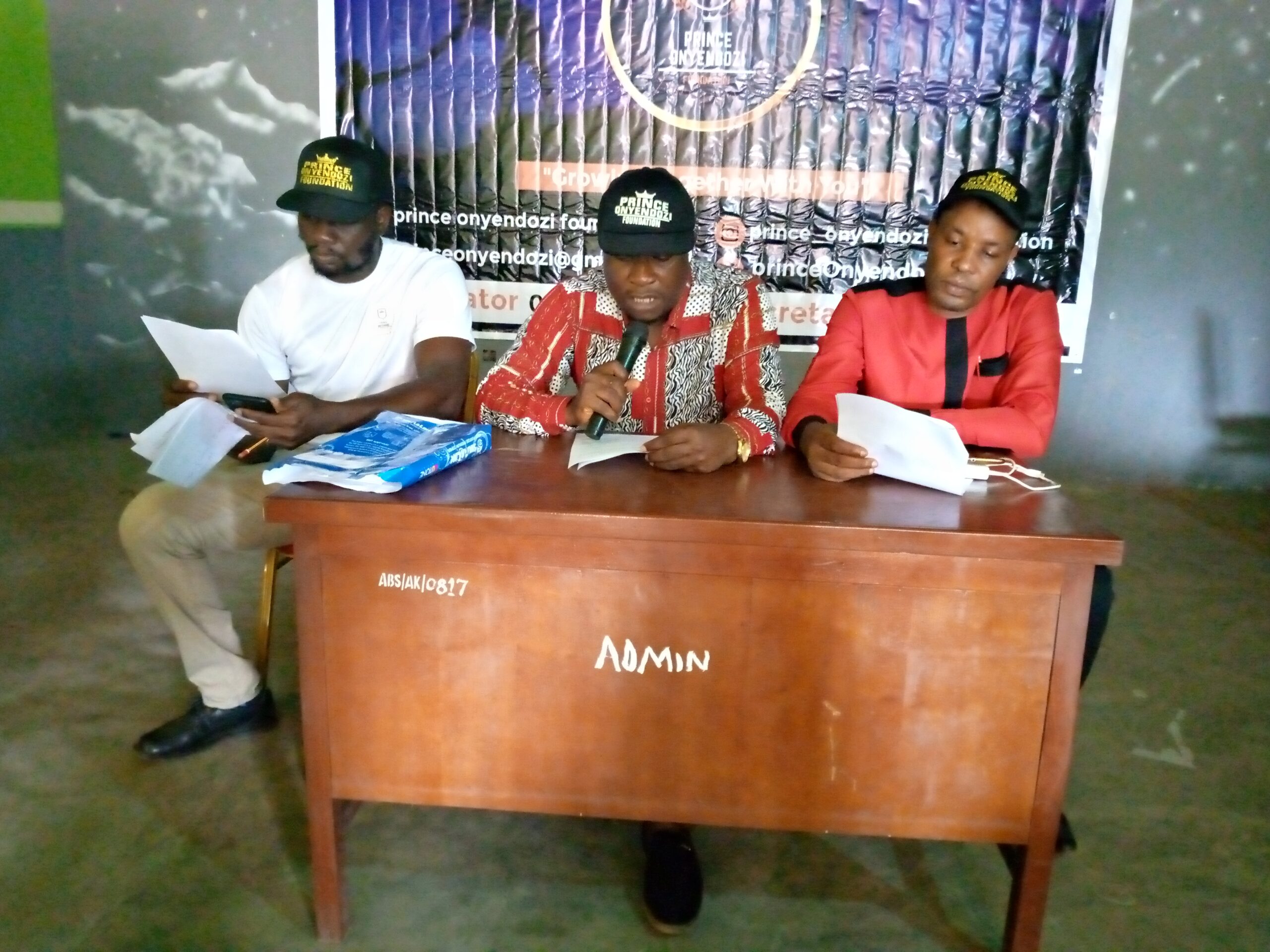 Also speaking, the Chairman of Orumba South Local Football Council, Dr George Okereke said the State Football Ball Association will partner the Foundation to organize the event successfully, commending Prince Onyendozi for his humanitarian gestures.
“Recently, the Anambra Football Association held its elections. We were given the marching orders to go to the various council areas and mobilize stakeholders to invest in sports development. Just when I was still cracking my head on how to undertake the task, Prince Onyendozi Foundation surfaced with this initiative. What is fascinating about this tournament is not just the huge amount of money involved but the coordination he has put into the whole process. Having reached out to the LFC, we will make sure the tournament holds successfully,” he assured.
Okereke further pledged his support to mobilize youths of Orumba South to participate effectively in the tournament, as according to him, they have been yearning for an opportunity like this.
For a football enthusiast, Abuchi Onwumelu, with the scouting agents and companies that will be coming for the tournament, it will surely provide the opportunity to discover quality players for the state football team.
The unveiling of the mascot for the tournament formed the highpoint of the ceremony.
Tags: Anambra statefootball tournamentPrince Onyendozi Foundation
ShareTweetSend

A Tribute in Honour of a Worthy Comrade, Sir J C Nwosa

Erdogan Lied, There Are No Turkish Terrorists In Nigeria – MURIC