In my curious food journey, I have realized that there are some recipes and dishes only a few would get to taste in their lifetime. Not because they are out of reach (although some are) but they are expensive and considered a luxury.

You might wonder why people would spend so much money on something like food but trust me, if you have the means, you would do it too. I know I would.

Here’s a list of some of the world’s most expensive food.

The Rules of Story Forms

First up is the Almas Caviar

My first encounter with Caviar was on a cooking show. Most contestants had only heard of caviar, and the task required them to get creative with it. A lot of people were eliminated that day. This spiked my curiosity, so I went googling.

Almas Caviar also known as ‘white gold’ holds the Guinness World record for the most expensive of all caviar. The pearly white eggs of the albino beluga sturgeon, found in the Caspian sea, are taken only from fish that are more than a century old; the endangered status of the fish has driven the price – and exclusivity – of this caviar. At £25,000 (for obvious reasons, we will not be converting this to naira) per kilo, it would be fair to say that Almas Caviar is one of the rarest foods in the world.

It is said to offer the most delicious taste, uniquely tender and nuanced in its flavour, with the richness of fresh buttery Beluga (whale) and an aroma that is all its own, you will slip into a dreamlike state with the very first bite.

Almas Caviar is eaten raw, although it is cured. Perfect as an appetizer.

Next is the Kobe Beef 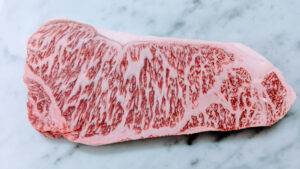 This delicacy has a whole lot going on. Kobe beef is a very particular variety of Wagyu (Japanese Cattle) called Tajima-Gyu that is raised to strict standards in the prefecture of Hyogo. The beef is named Kobe beef because Hyogo’s capital city is Kobe.

The cows are tended to closely throughout their entire lives, fed exclusively on only the finest grasses, and, incredibly, are given daily massages.

Along with sake baths, and the occasional beer sampling (said to calm the cows). Wheeew, talk about pampering

These steps are taken to ensure that Kobe beef is inimitable, unsurpassable, and utterly exclusive. Who would not want to eat a pampered cow as compared to ours that go through rigorous lashing and interstate travel? 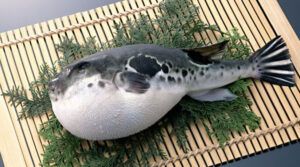 This is the delicacy that got my jaw dropping the whole time I was reading about it. Why would anyone spend so much money on a fish that is known to be very poisonous? And it’s eaten raw too.

The Japanese delicacy fugu, or blowfish, is so poisonous that the smallest mistake in its preparation could be fatal. It is known to be more poisonous than cyanide. I don’t know about you fam, but I am not risking this.

A license is required to buy, prepare, and sell fugu, and trained chefs are skilled enough to eliminate any danger. The chefs train for a minimum of two years, in order to develop the required skills to prepare the fish. I’ll pass, thank you. 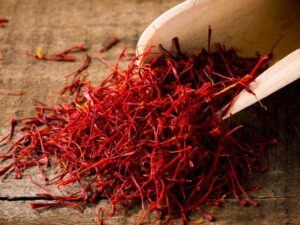 Even the name sounds really fancy. Saffron also known as ‘red gold’ originates from the Middle East. It is one of the most expensive spices in the world which cost around $10,000.

So why is it so expensive? Each flower produces only three threads (stigmas) of saffron, and it blooms for only one week each year. The saffron must be harvested by hand! in the mid-morning when the flowers are still closed in order to protect the delicate stigmas inside.

It takes about 1,000 flowers to produce just one ounce of saffron. That’s why you’ll pay $10 to $13 per gram for the real deal. To make sure you’re getting the best stuff, take a sniff—you want saffron that smells a bit like sweet hay. It should also have all red stigmas, no yellow stamens.

According to persons who have had a taste of this spice, they describe it as slightly sweet. They say it’s tricky to describe but instantly recognizable in a dish. As annoying as it is to say, you know it when you taste it. So, it’s over to the spirit of discernment. 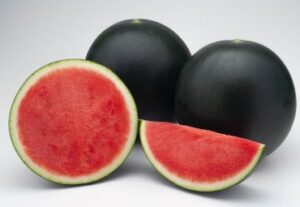 I love watermelon, and this certainly looks like a must-have. Described to be super sweet and crisp, the Japanese watermelon is known for its tough skin that has a very dark shade of green to appear sometimes black and shiny. It is grown exclusively on Hokkaido, and produced in limited quantities, which puts them in high demand and at high prices. They have been known to sell for over $6000. 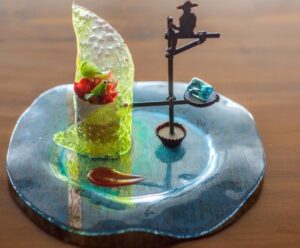 Sounds pretty mysterious and expensive. This beautiful work of art is the world’s most expensive dessert. At $14,000, you can have this handcrafted via special request and with proper notice. It is the only dessert known in existence to be topped with an 80-carat jewel. Only available at the Fortress Resort, The Fortress Stilt Fisherman Indulgence is gold leaf Italian cassata, flavoured with Irish cream infused with fruit that makes up the body. Served with a mango and pomegranate compote, and a Dom Perignon champagne sabayon, the thing that truly sets this dish apart is the handmade chocolate fisherman, sitting astride a traditional stilt (also chocolate) which is counterbalanced by the 80-carat aquamarine stone.

I know, they are a lot to take in. There are a whole lot more but I’ll let these marinate. Have you tried any of these yet? Which would you be willing to try?

The Rules of Story Forms

How a mother can help her daughter marry on time

“I am a practical demonstration of God’s divine love” – Groom