It was a ceremony that celebrated the rich Igbo cultural heritage as Aguleri Kingdom in Anambra East Council Area of Anambra State held its 120th Ovala Festival.

The event which also marked the first Ovala of the traditional ruler of the community, Eze Mike Idigo, witnessed conferment of chieftaincy titles on some deserving personalities from within and outside the community notable of whom were former Governor of Central Bank of Nigeria, Professor Chukwuma Soludo, real estate developer, Chief Clem Nwogbo, renowned business man, Augustine Oguejiofor, among others. 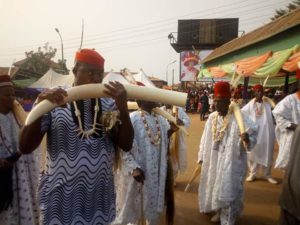 The ceremony took place at Amaigwe arena and featured performances by masquerade and dance groups to the excitement of the mammoth crowd that graced the occasion.The Ovala commenced in earnest when the traditional ruler of the Kingdom, Eze Idigo, dressed in royal regalia and accompanied by members of his cabinets, was ushered into the arena with traditional tunes from the Ịgba Eze and Uvie.

In his Ovala message, Eze Idigo said that Ovala Aguleri heralds the New Year, as it closes a cycle of festivals in the past year and begins a new cycle.He said the festival aside celebrating the cultural endowments of Aguleri people and Ndigbo, is also serves as a reunion for Aguleri both home and abroad and an avenue to preserve their culture and tradition for posterity.Conferring chieftaincy titles on the individuals, the royal father reminded them that henceforth, they were part and parcel of the kingdom and as such, should strive to portray the kingdom in good light. 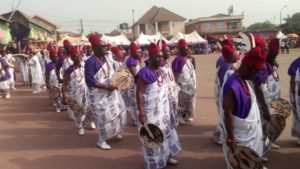 “These titles were in recognition of your immense contributions to the development of Anambra State and Aguleri in particular. Henceforth, you are illustrious sons of this community and, therefore, entitled to the rights, privileges, duties and obligations of sons of the soil. What we are doing here today has no political leaning. Therefore, we expect you to be good ambassadors of this kingdom as sons,” Eze Idigo said.

Anambra State Governor, Chief Willie Obiano who was represented at the event by his Chief of Staff, Chief Primus Odili, in a message, advised the people of Aguleri to uphold peace in the community.According to him, “I urge you my people of Aguleri, to maintain unity which typifies the theme of the Ovala, ‘Ovuobi.’ It is only unity and love that will take our community to the enviable height we have always wanted.” 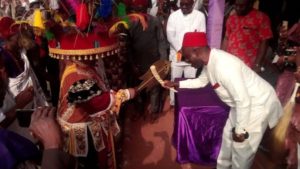 The titles recipients, who spoke separately, said they would do the community proud by participating in the development of the town.Speaking earlier, during a homily Mass to mark the event, a visiting Priest, Reverend  Father Nicodemus Aloefu, harped on the need for the people to preserve the positive aspects of their culture, noting that Ovala mass is a service of thanksgiving to appreciate God for his protection throughout the year.

Paying of homage to the king by his subjects, friends and loyalists formed the highlight of the Ovala.