In this riveting interview with Stanley Ugagbe, Acting editor of The News Chronicle (TNC), Anthony Agbo, a former Senator of the Federal Republic of Nigeria, harped on sundry issues.

TNC: Thank you for granting us audience. You’re quite an accomplished politician. You were the Speaker of Enugu State House Assembly – before the creation of Ebonyi state. You have also served as a commissioner at various capacities in Ebonyi State and capped it by becoming a Senator of the Federal Republic of Nigeria, why do you think your name still does not ring bell in the public domain despite these accomplishments?

SAA: Thank you for having me. From 2007 – 2011, I was the senator that made the highest number of appearances in Nigerian Newspapers arising from the things I did. I was the most quoted Nigerian Senator. I appeared in the news more than any other legislator in Nigeria both at federal and state level. After my sojourn as a senator and after my subsequent effort to run for the governorship in my state under the All Progressive Grand Alliance, I decided to go low profile.

TNC: Thank you so much for that honest feedback. Perhaps there are people in the public who are wondering how senator Anthony Agbo contributed to Nigeria’s growth during his time as a senator, can you tell us some of the ways you contributed to the political evolution of Nigeria?

SAA: Well, as a Senator I feel I broke some records. As a first time Senator, I can remember I sponsored four personal bills, four private member bills which is a record for a first time Senator. I am still the first Senator that sponsored a bill from my own state. I attracted so many projects to my state. I campaigned vigorously for the rehabilitation of the Enugu-Abakaliki expressway. I built several classroom blocks in several locations in my state. I brought enumerable boreholes to my state. I started the agitation for the establishment of the ministry of disability and to strengthen that agitation, I gathered all the people with disabilities from the 36 States to the Yaradua centre, Abuja. The recognition that the Federal government has given to people with disability today arose from the foundation I laid. I was the vice-chairman of the senate committee on the  FCT. I was canvassing the idea that the design of Abuja does not qualify as an International city. Those who designed Abuja should have been more futuristic – they have several global cities to draw designs from. I was the one that moved the motion to upgrade Akanu Ibiam airpot at Enugu to an International airport. 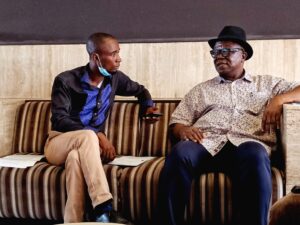 TNC: You contested for the gubernatorial election in 2015 on the platform of All Progressives Grand Alliance (APGA) and the outcome did not favour you. Why did you think you failed to make it?  Do you intend to contest again? If so, what do you think will work to your advantage this time around?

SAA: I lost because the people in my state were not ready for the kind of ideas I had because my ideas were bold and unique. My campaign was so interesting that people were calling in from all over the country. I campaigned on an element I entitled the doctrine of the superstate which has to do with the creation of wealth through your intellectual power and making yourself indispensable. You must produce things other people will need to buy. I told my people that governance and leadership is not all about “I will build road, provide electricity, pay salaries etc”. Those are the basic responsibilities of a leader which you must provide. The problem of leadership in Nigeria is lack of cultural literacy.

I wouldn’t know if I will contest again, I will prefer to place myself in God’s hands because Nigeria is a difficult terrain. But one thing I thank God for is that we later got a governor that thinks strategically and today, Ebonyi is the best-governed state in terms of infrastructure and other elements of governance.

TNC: Defection in politics is not a new thing. But in recent times especially under the current administration, there have been dramatic defections. You also defected to the APC shortly after you lost the 2015 guber election. Can you tell us why you left APGA for APC and if you had won the election under APGA, would you have joined the APC?

SAA: Actually, I was a foundation member of the APC but there was a little conflict I had with my colleagues in the APC who were also interested in the Governorship. They are people I didn’t want to pick a fight with so I defected to APGA in order to contest for the governorship. So immediately after the election, I returned to the APC naturally. And then again, if I had won the election under APGA, I would have still returned to the APC because of the geo-political zone I come from – because of the interest of my people. It’s not enough to become a governor; you also have to consider the interest of the people on a global perspective. The idea of returning to the APC has to do with the necessity of integrating the Igbo nation, the south-east into the scheme of affairs of Nigeria. The idea of rejoining to APC (governor Umahi also joined the APC)  is to provide a national platform for an Igbo man to become a President of Nigeria. And that idea of Igbo man becoming president is not predicated on self-interest of the Igbo man – it has to do with healing the country, to address the issue of equity, justice and fairness and when that is done, healing will be achieved.

TNC: Do you think Igbo Presidency is achievable in 2023 especially since many Northerners are against it?

SAA: I haven’t seen any indication that Northerners are generally against Igbo Presidency. Every patriotic Nigerian knows that Igbo Presidency is indispensable – that is the only way to the survival and greatness of this nation. Injustice kills a nation. You have major zones in this country and each of the major zones have taken their slots in the presidency. Why must it be prejudiced against a particular people?

TNC: You applauded Umahi’s defection from the PDP, even though he defected from his party when there was no infraction or crisis in the PDP. There are suggestions from some quarters that his defection infringed sections of the constitution since there were no known factions in the PDP at the time he decamped. What is your general opinion about the phenomenon of politicians crossing carpets once they are unable to get what they want from their parties?

SAA: The constitution provided that window of crossing from one party to the other at will for people to feel free. Umahi’s defection has nothing to do with any particular self-interest and he didn’t infringe on the constitution. Umahi saw the need for the people of the South-East to be integrated in the national agenda and that was why he joined the APC. The whole idea is to provide a forum where an argument can favour an Igbo man to become the next Nigerian President.

TNC: You expressed confidence that the defection of Umahi to APC is a clear indication that the party will produce the next governor. Meanwhile, in Igboland, the party is perceived as a bad product. In your opinion, how would the next candidate navigate this perception?

SAA: There was never a perception that APC is a bad product in Igboland. The situation is  that the Igbos have been looking for justice in this country and any area they see an avenue through which they can get that justice, they move towards that area. If APC picks an Igbo man as a candidate for the 2023 Presidential election, every other party is going to score zero in the south east.

TNC: There is this perception that the Igbos are their own main problem – that they are usually unable to achieve a consensus on who would run for what.  How would you react to this?

SAA: No group reaches a unanimous consensus of projecting themselves – no group has ever done that. When Obasanjo became President, the entire South-West rejected him and that was why he lost the election in his ward, polling unit and local government. We have never had a situation where the entire geopolitical zone can come together and say this is our position.

TNC: What is your take on the clamour for Biafra and what is now called the Asaba Declaration by the Governors of the 17 states in the Southern part of the country, especially their stand on the issue of restructuring which Buhari has kicked against?

SAA: The agitation for Biafra is derived from the injustice people perceive in this country. A cross-section of Igbo youth are making the agitation because they feel they are not wanted in Nigeria. Ideally, the Igbos will be the last people that will go anywhere. Any city you go to in this country, Igbos have lots of investment. In all sincerity,  the Igbos don not want Biafra but Biafra has become a child of circumstance because of the injustice. The South-west are the people who are really ready to leave this nation.

Restructuring is being clamored for because of the climate of unease in the country. It is because things are not going well. The climate of insecurity is what is fuelling all these. I support restructuring but it is better for us to remain one Nigeria. Nigeria can be repaired and become a great nation without restructuring.

TNC: Let me conclude this by asking this question: In April 2008 you were appointed vice-chairman of a committee investigating Mallam Nasir el Rufai’s administration of the FCT. The Committee was very critical of El Rufai’s administration. While some praised your committee, supporters of El Rufai saw it as a witch-hunt. In retrospect how would you assess the work of that committee? Do you still stand by the position of that committee?

SAA: That public hearing on the administration of El Rufai was not predicated on the perception of the Senate Committee. It has to do with series of petitions that were coming to the committee on FCT against what people felt were injustices done to them. El Rufai’s administration was really controversial but I love him as a person. I love most of the things he did because it made him distinct as a bold and courageous leader. Actually, a lot of discoveries were made, so many mistakes were made. But the investigation was never a witch-hunt and I still stand by the position of that committee.

#EndSARS: The Vanguard is Vanishing Empty