The National Boundary Commission (NBC) should be blamed for the continued hostilities and senseless killings in the lingering boundary crisis between the Ngbo community in Ohaukwu LGA and the Agila people in Ado LGA of Benue state.

This was the opinion of the Human Rights, Liberty Access, and Peace Defenders (HURIDE), Foundation while addressing newsmen in Enugu after its national executive meeting which centered on the spate of insecurity across the country.

14 people have been reportedly killed and property worth millions destroyed in a recent clash between the two boundary communities between Ebonyi and Benue States.

The Chairman Board of Trustees of HURIDE, Dede Uzor A. Uzor, who addressed newsmen, regretted that the bloodbath could have been averted, had the NBC been up and doing in its task of intervening, determining and dealing with any boundary dispute that may arise among states, local government areas or communities with a view to settling them.

“This boundary dispute has been lingering for a very long time and this time, it has claimed precious lives. We at HURIDE find this unacceptable that NBC cannot handle the matter. These lives were wasted because of the lackadaisical attitude of the government agency. The NBC ought to have moved into action and come up with a serious line of action that will make the two communities to maintain peace. Now that lives have been lost and property destroyed, how then can the matter be resolved,” he queried.

Against allegations that the killings were perpetrated by Fulani Herdsmen, Uzor pointed out that the dastardly act was as a result of the boundary dispute.

“These are two brothers and sisters residing peacefully but because this boundary issue has gone unaddressed for a long time, it has resulted in bloodshed. Lives are sacred and should be protected. We are calling for the immediate deployment of security agents so that the wanton killings and destruction of property will stop. HURIDE condemns this despicable act by both sides and we call on security agents to arrest those who perpetrated this act and bring them to justice,” HURIDE said.

“Nigerians are murdered like chicken in their farms, homes, on the roads, without a serious response from security operatives. Fulani Herdsmen are still allowed to carry AK-47 everywhere without restrain. The continuous killings of Nigerians in their communities, homes, farms, on the roads, should be checkmated if Buhari is serious in fighting these rampant killings of Nigerians. To show seriousness in fighting the killings, the President should immediately proscribe Fulani Herdsmen or ban them from carrying sophisticated arms and ammunitions. If they can swiftly ban harmless Indigenous People of Biafra (IPOB), why is it difficult for them to ban the groups that wield arms, that have been declared one of the most dangerous terrorist groups in the world,” HURIDE said. 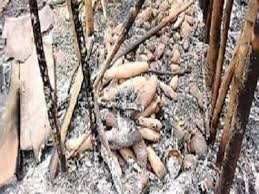