by Kenechukwu Ofomah
in Politics
0

There is palpable fear and an atmosphere of uncertainty in Anambra State, over the conduct of the November 6 Governorship election, following the killing of Dr Chike Akunyili, husband to the late former Director General of the National Agency for Food and Drug Administration and Control, NAFDAC, Prof Dora Akunyili by gunmen on Tuesday.

The late Chike was killed around Nkpor in Idemili North LGA of Anambra State on Tuesday evening, while he was driving to his hometown Agulu in Anaocha Council Area, after attending an event organized at Onitsha by the University of Nigeria Nsukka Alumni Association (UNAA) where his late wife was honoured. 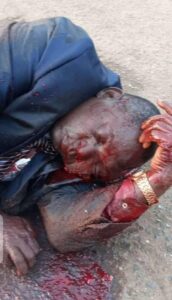 The incident trails several cases of shootings and killings which have happened in parts of the state in the past few days.

The development has also resulted in the cancelation of various political rallies earlier billed to hold on Wednesday.

Meanwhile, a brother to the deceased, Cyril Akunyili had confirmed the killing earlier on Wednesday on his Facebook wall.

The Anambra State Police Public Relations Officer, Tochi Ikenga had yet to confirm the incident as at the time of filing the report, despite the inquiries sent to him.

Reacting to the development, the State Chairman of National Youths Council of Nigeria, NYCN, Comrade Samuel Egwuatu described the incidents of killing as worrisome, attributing the development to leadership failure.

Egwuatu who regretted that youths are the perpetrators of the violence, noted that over the years, government has failed to provide the enabling environment for youths, forcing them to become willing tools for all kinds of crime and insecurity.

The Anambra youths leader expressed worry that if the development is not checked, in the nearest future, no politician will be able to walk the streets for fear of being attacked.

He suggested pragmatic and genuine efforts at addressing the insecurity question vis a vis, job creation and youths empowerment.

According to Egwuatu, the security agencies must collaborate to establish a strategic security outfit that would tackle the growing insecurity head on, warning that with the way things are going, the Southeast region is beginning to lose its very essence.

Despite MURIC’s warning, Buhari heaps praises on Erdogan, says he is an Exemplar on how to treat refugees

November 6 and the Journey towards Anambra Elections: Profiling the three major contestants