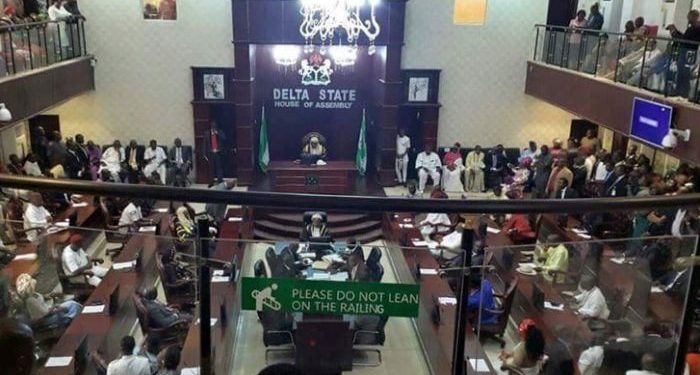 The passage of the bill was sequel to the report of the house committee on Finance and Appropriations presented by its Chairman, Hon. Erhiatake Obori-Suenu.

Hon. Erhiatake informed the house that the committee swung into action immediately after the second reading of the appropriations bill was taken on Tuesday, 21st October, 2021 and was committed to the Committee on Finance and Appropriations, together with the Standing Committees of the house sub-committees.

“The various sub-committees went to work and conducted the Appropriations Defense for their various Ministries, Departments, Agencies and Parastatals.

“The committee carefully scrutinized the various report of the sub-committees with their recommendations vis-a-vis the objectives of the Budget which are; Completion of on going projects and focus on new projects in critical areas of needs, Greater transparency and proper accountability in public expenditure so that Deltans can enjoy the dividends of democracy, Creation of enabling environment for investors to operate in the State, and finally, Expansion of the State revenue base in the areas of internally generated revenue,” she stated.

“However, the committee carefully evaluated the submissions of the various sub-committees and the provisions in the various heads and sub-heads.

In his remarks, the Speaker, Rt. Hon. Sheriff Oborevwore, thanked the lawmakers for a successful passage of the bill.

“My dear colleagues, you will recall that on Thursday, the 21st of October, 2021 His Excellency, Senator Dr. Ifeanyi Okowa presented the year 2022 Budget to this honorable House for legislative processing, scrutiny and passage in line with the provisions of Section 121 of the Constitution of the Federal Republic of Nigeria, 1999 (as altered).

“I am delighted because we have successfully discharged this key function of authorising the Government expenditures for year 2022.

“And I sincerely thank all of you for a job well done.

“From the First reading of this Bill to its final Passage, you diligently brought your wealth of knowledge and experience to bear.

“Your commitment to the success of this Bill is truly amazing and I thank you.

“There is no doubt in my mind that by the timely passage of this Bill, Delta State is on a good start to year 2022.

“I strongly believe that this Bill will greatly impact the lives of Deltans and will bring about massive infrastructural and human capital development in our dear State.

“So, let me at this juncture thank His Excellency, Senator Dr. Ifeanyi Okowa, for his well-timed presentation of the year 2022 Appropriation Bill in line with international best practices,” the speaker stated.