by Adams Peter
in News
0

A non-governmental and advocacy group – Citizens Quest for Truth Initiative has called on the Governor of Rivers State, Nyesom Wike to take urgent and proactive measures towards remedying the deplorable condition of Celestine Omehia Road, popularly known as (SARS) Road in Port Harcourt.

The group in a statement circulated to news platforms explained that “a call by concerned residents of Celestine Omehia Road popularly known as SARS Road, Port Harcourt, recently made the Citizens Quest for Truth Initiative to embark on a special quest to see the true state of this important link road and report accordingly to relevant authorities.” 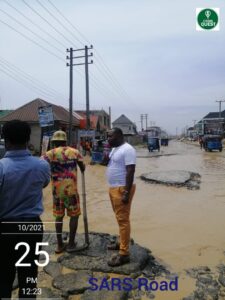 The statement reveals that: “A young man by name Mr Monday whom we met at the middle of the bad portion, who selflessly helps direct vehicles to the right spots so as not to get stock, confirmed to Citizens Quest Team that the portion got worse months ago.

“One of the motorists, Mr Chukwuemeka, said the havoc the bad portion is causing on their vehicles is on the high side and implored the government to find a lasting solution to the problem. Other road users’ lament how the portion of the road gets their vehicles damaged and waste their time on a daily basis.

“Also one of the Elders of Rumuodumaya, Mr Friday Nyesom Ekwe decried the neglect of the road by the state and the local government. He passionately appeals to both level of government to come to their aide.

“A Youth Leader, Mr Ejekwu Promise pleaded with the Governor of Rivers State,  to support and prevail on the LGA Chairman, Bar. George Ariolu to swing into action and have the road fixed as the road falls within the jurisdiction of the Obio-Akpor LGA. He was specific about the need for a proper drainage as the absence of it caused the damage observed in different parts of the road.

Citizens Quest for Truth Initiative, having confirmed the deplorable state of the portion of such vital road, urgently seeks for intervention of the State government to remedy the situation. The government should be proactive in fixing the road to ease the movements of all and sundry.

The NGO furthermore advised Gov. Wike to expand the road and ensure there is drainage to forestall damages after the repairs or reconstruction of the road.