Carlo Acutis:  The Scintillating Millennial Who Broke the Internet

For many young people especially Catholics around the world, Blessed Carlo Acutis (3 May 1991–12 October 2006) has broken the Internet to become an irresistible sensation. Being the first venerable to appear in jeans, a sweater and sneakers and be considered for Sainthood, Acutis comes across as a teenager who was not only media savvy but morally and spiritually up to date at a time that the Internet has been polluted with all things mundane. Written in the language of digital culture, the life and times of this young Italian constitute a social gospel for millennials.

This enigmatic personality was born in London to Italian parents, Andrea Acutis and Antonia Salzano. His parents had worked in London and Germany before the family moved to Milan where he spent most of his life in the city. According to Antonia, his mother, “There was in him a natural predisposition for the sacred.” At the of age five, he would trek to Church and preach to his parents about the importance of attending Holy Mass. He often reminded them that since Jesus was at every celebration of the Holy Eucharist, they should not allow him (Jesus) to wait for them in the Church in vain.

He was known for works of charity and spent his money on helping disadvantaged people in his community. He also volunteered at a soup kitchen in Milan. “With his savings, he bought sleeping bags for homeless people and in the evening he brought them hot drinks,” his mother revealed. He spoke about his faith in the Holy Eucharist with passion. His enthusiasm extended to the world of computers which he spent time using judiciously.

That was what that moved him to learn coding at a tender age. Instead of employing the computer for chatting or catching fun, Acutis used it to manage websites for local Catholic organisations. He also created some of his own websites to document miracles of the Holy Eucharist across the world. “He appreciated Blessed Giacomo Alberione’s initiatives to use the media to evangelize and proclaim the Gospel and aimed to do this with the website that he had created. He also liked the film and comic editing.”

Instructively, on his website, he had this to say about the Holy Eucharist: “The more Eucharist we receive, the more we will become like Jesus, so that on this earth we will have a foretaste of heaven.” This lover of the Eucharist was “conscious of the dangers of technology.” Little wonder, speaking about him last year, Pope Francis maintained that Acutis was not overtaken by “the mechanisms of consumerism and distraction,” like other young people. 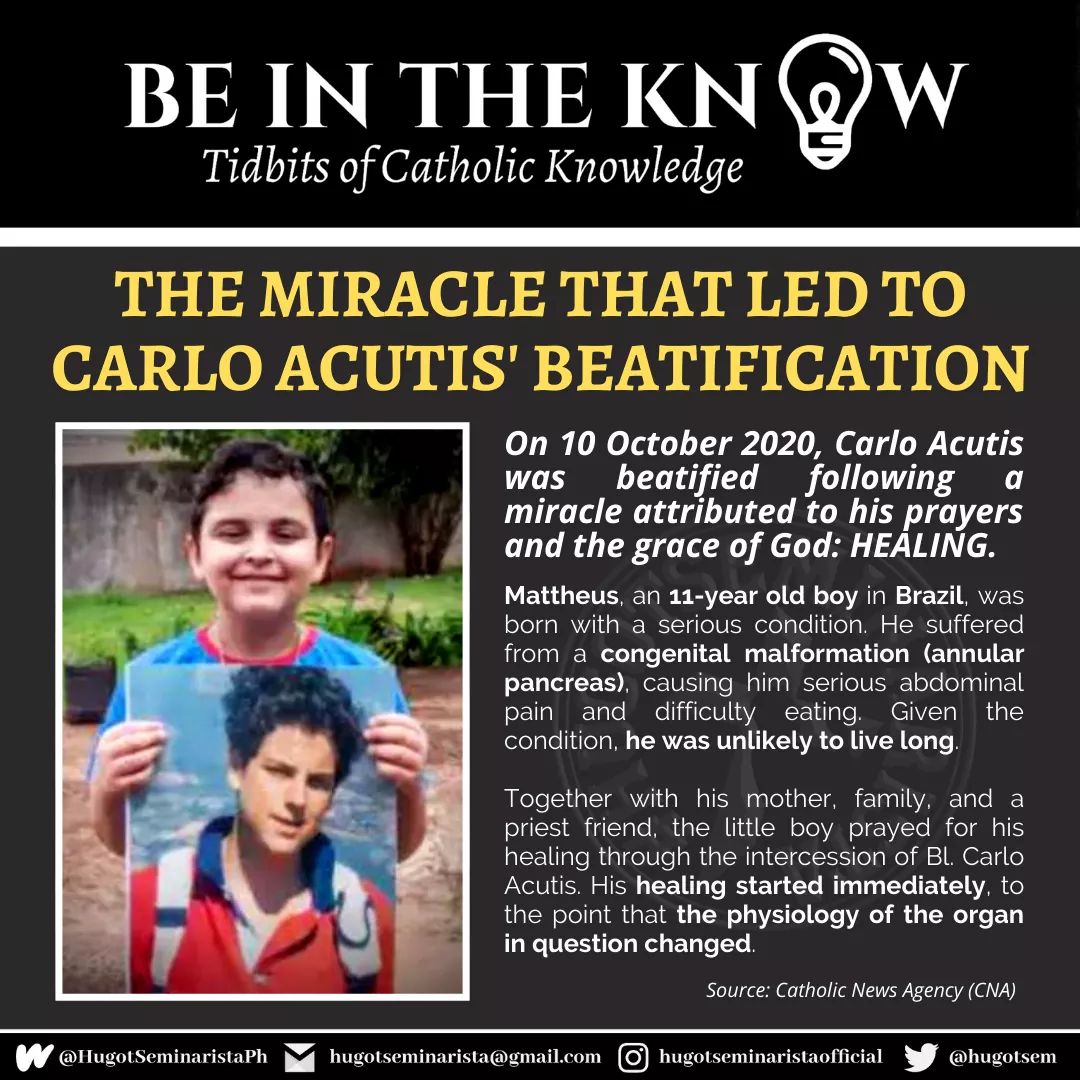 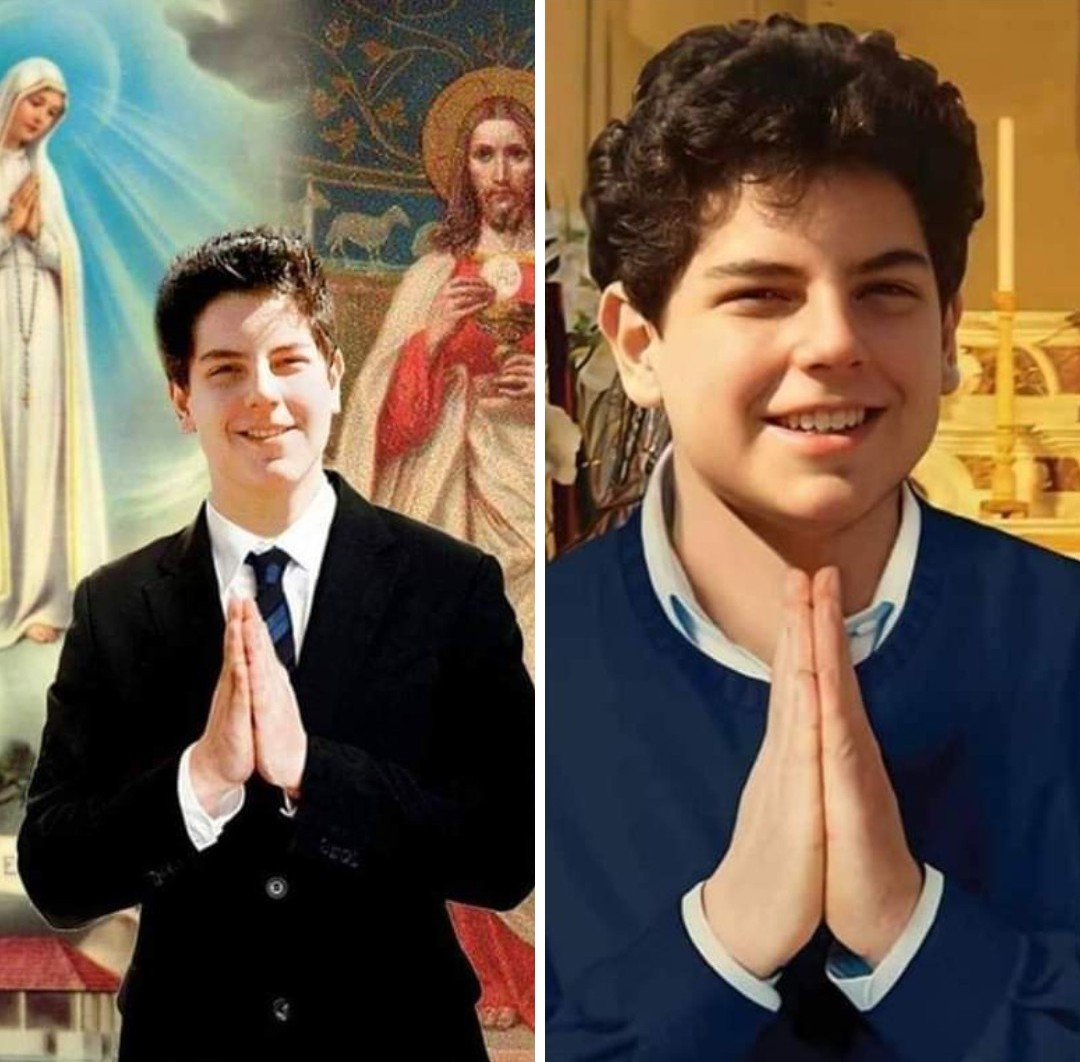 The British Broadcasting Corporation (BBC) described him thus: “An Italian teenager who used the internet to spread his faith is on a path to becoming the Catholic Church’s first millennial saint.” What is more, “the patron saint of the internet” as he is now fondly called was said to have died of leukaemia in 2006 at the age of 15. Before his death, he said: “I offer all the suffering I will have to suffer for the Lord, for the Pope [Benedict XVI], and the Church.” With the recommendation of a local priest, in 2013, a Brazilian boy who was suffering from a rare pancreatic disease was cured when the family sought the intercession of Acutis. Consequently, he was beatified in the presence of his parents on 10 October 2020.

According to the ecclesiastical norm, usually, the Congregation for the Causes of Saints opens up a period of investigation for up to five or more years. This is followed by a pronouncement of the deceased as “a servant of God” after evidence is gathered. Then, scrutiny as to whether the person lived a virtuous life in which case the person is addressed a venerable when it is positive. It is after this that beatification which “requires a miracle to be attributed to prayers made to the individual after their death” takes place. Only after a second miracle is attributed to the individual will the canonisation process be initiated and pronouncement made.

In Acutis, we find a young man who perfectly navigated through the murky waters of the Internet and yet found his balance. He was skilful about the use of time and teaches us that both Caesar and his coin belong to God. In the life of this teenager, the inner longing of the soul was met by a personal devotion to the Eucharist “which became a core theme of his life.” He went for confession once a week and had Saints like Francis of Assisi, Francisco and Jacinta Marto, Dominic Savio, Tarcisius, and Bernadette Soubirous as his spiritual guides and models. He challenges young people to realise that only God can satisfy a thirsty soul.

By converting his parents and Raejsh, their Hindu house cleaner, the young Internet guru reminds young people not to be shy about preaching the gospel. In a world that is becoming increasingly anti-Christ, Acutis lifts the banner of Christ and invites us not to be ashamed of the cross of Christ. Besides, Jesus warns that if we are ashamed of confessing his name before men, he would deny us before his father in heaven (Cf. Matthew 10:33).

This should serve as a warning and admonition for all who proclaim the name of Christ. In Blessed Acutis, we realise that number of years is not the essence of life (Cf. Wisdom 4:8). In just 15 years, the interruptible nature of his mortal remains draws our attention to the portion of scripture which says, “I will not let my beloved know decay” (Acts 2:27). After all, the Bible says: “Length of days is not what makes life honourable” (Wisdom 4:7-15). As such, we should concentrate on the quality of living through charity and other good works.

Finally, those who use the Internet for fraudulent acts like yahoo-yahoo, cyberbullying, recruitment for terrorism, selling and purchasing pornographic content and the like must have a rethink. Also, those who think that people who wear jeans, sweaters and sneakers cannot make heaven have been proven wrong. While modesty is not negotiable, God is using Acutis to teach us that Sainthood is not impossible in our age. As we wait his Canonisation, may this teenager who suffered leukaemia and lived a short life heal our world of its hurts of violence and evil. Blessed Carlo Acutis, pray for us sinners!