by Ikedi Mekz
in Music, trending
0

A Burna Boy concert at the prestigious 02 Arena London expectedly, was definitely going to be shut down going by his newly earned status as Grammy-winning superstar. His first performance as a support act at the venue in 2019 was apparently ecstatic as the crowd went wild seeing him mount the stage. Then the Afrofusion star appeared again the second time at the 02 Arena alongside British superstar Stormzy at the BRIT Awards in 2020, but returned for his first-ever headline show on Friday, August 27, 2021, with his concert performance at the O2 Arena as part of his Space Drift Arena Tour. 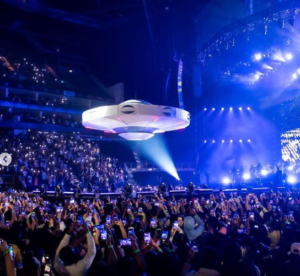 The O2 Arena, known for being the second-highest seating capacity of any indoor venue in the United Kingdom, and tagged the world’s busiest music arena, had its concert hall packed to the brim with an overtly excited crowd. This is, following the release of his latest hit single ‘Question’ featuring Nigerian record producer, Don Jazzy which has recorded massive waves. A highlight from the show that left the crowd in awe of the ‘Twice as Tall’ crooner was his entrance and exit. The Grammy-winner arrived at the concert on a giant spaceship, and he gave fans an unforgettable experience.

‘Oluwa Burna’ hit the stage, with thousands of rave audience in attendance to see his electrifying performance. In a video that was shared on social media, the spaceship could be seen descending and “vomiting” the mega superstar after heralding his arrival with smoke. Literarily the venue went agog seeing him touched down the stage and was greeted with rapturous applause from the audience. The concert, which is themed the ‘Space Drift’, featured exhilarating performances from the ‘Way to Big’ crooner and his team as he dazzled the audience with hit tracks from his several discography.

Some of his hit songs performed to the delight of music lovers includes ‘Kilometre’, ‘Location’, ‘African Giant’, ‘Pull Up’, ‘Way Too Big’, and ‘Another Story’. He was later joined on stage by Marvin’s Ruger and Rema, King Promise of Ghana, and Omah Lay. The ‘African Giant’ singer was the third artiste enlisted by the organisers (Cokobar in association with Spaceship Entertainment) for the O2 Arena’s ‘Welcome Back Show’ series lined up for music lovers returning to the facility months after it was shut down due to the COVID-19 pandemic.

The fully packed arena, captured by Michael Tubes Creation, revealed the artiste, known for his mercurial performances, reinventing the cataclysmic sounds that make up his unique music. Reacting to their performances, Burna Boy tweeted, “I swear watching Rema and Omah lay tonight made me so emotional. I’m so proud of them boys.” Thanking Burna Boy for the opportunity, Ruger tweeted, “My first performance in London was at the O2. My God, you are so good I will praise you for the rest of my life. God bless @burnaboy.” Following the concert, Burna Boy is billed for more performances in Los Angeles in the US; Paris in France; and Amsterdam in the Netherlands on October 8, November 10, and November 15, respectively.

The trips are part of his four-country tour for ‘Twice As Tall’, his Grammy-winning studio album. Wizkid, another Nigerian music star, is also scheduled to perform at the 02 Arena on November 28 as part of his ‘Made in Lagos’ album tour already sold-out.