Nigeria’s outspoken former senator, Dino Melaye has disclosed that Premier League side, Arsenal have signed him.

The social media sensation, Melaye revealed the development in a post on Facebook while sharing a picture of him on Arsenal jersey. 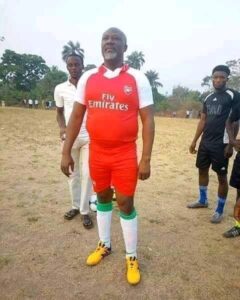 He wrote “Hope for Arsenal as they sign a new global striker”.

Apparently, this is one of his usual pranks on social media.

Meanwhile, Arsenal lost to Chelsea by two goals on the day he allegely signed for the club and are now in the relegation zone.

Why Buhari is luring journalists into the prophetic ministry

We use cookies on our website to give you the most relevant experience by remembering your preferences and repeat visits. By clicking “Accept All”, you consent to the use of ALL the cookies. However, you may visit "Manage Cookies" to provide a controlled consent or visit our PRIVACY POLICY to know more.
Reject AllManage CookiesAccept All
Manage consent