Awka – The Nigerian Army says it has neutralized one of the Biafran National Guard, BNG gunmen who attacked troops’ location at Amaekpu, Ohafia Local Government Area of Abia State on Thursday, 28 October 2021.

On Thursday, videos surfaced online showing armed BNG men in army regalia, claiming to be on a mission to release alleged ‘prisoners of conscience’. 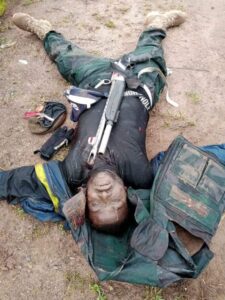 The armed men were videoed at a petrol station where they packed items at the Super market and filled the petrol tanks of the vehicles they were using, without making any payment.

The alleged commander of the gang who identified himself as General Innocent Orji, swore that there will be no election in Anambra State on the 6th of November, 2021.

Another video had shown where the gunmen were engaged in a gun duel and members injured with bullet wounds.

In a statement on Thursday, the Director Army Public Relations, Brigadier General, Onyema Nwachukwu said troops conducting ‘Exercise Golden Dawn’ neutralised one of the BNG after the attack on their locations.

According to him, the assailants, who were heavily armed and conveyed in several vehicles opened fire on the troops’ location, were met with stiff resistance by the troops.

“In the encounter, the troops neutralized one gunman, while others abandoned their vehicles and retreated in disarray with gunshot wounds.

“The troops also recovered a pump action gun, among others,” he said.

Nwachukwu revealed that while the criminals withdrew, having been overwhelmed, they were promptly intercepted at Eda by troops of Forward Operating Base Ohaozara in Ebonyi State.

“The troops recovered additional three vehicles and apprehended one of the gunmen,” he revealed.