The Senator representing Anambra Central Senatorial District in the National Assembly, Senator Uche Ekwunife has bemoaned the huge economic loss suffered by the State as a result of the incessant fire incidents across the state.

Ekwunife was speaking today when she visited the scene of a fire disaster at Old motor spare parts, Mgbuka Obosi.

The fire which happened earlier this month had led to one death and destruction of 310 shops.

The Federal Lawmaker explained that the visit was to access the level of damage caused by the fire outbreak in the market and as well to commiserate with the victims. 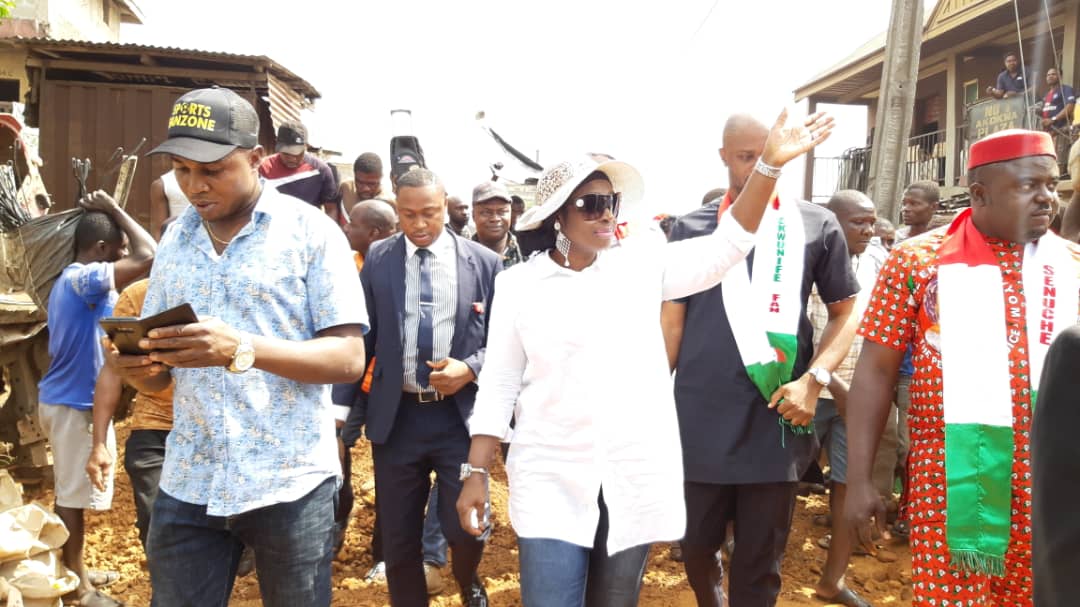 Also during the visit, Senator Ekwunife donated money to a Trust-fund initiated to provide financial succor to the affected traders

Bemoaning the ugly incident, Ekwunife said that the visit was part of her campaign promises to people of her district to identify with them both in good and bad situations.

“This is a very unfortunate incident and looking at the havoc wreaked by the fire, it is obvious that these traders lost so much. I sincerely commiserate with them over this tragedy and encourage them not to lose hope as better days are still ahead,” she said.

The Lawmaker also harped on the need for the traders to buy into the insurance initiative to secure their goods in the event of such a disaster.

“These kinds of things are unforeseen and it is important that one prepares ahead for them. I urge our traders to take the issue of insurance seriously. It is equally good that we as market people take precautionary measures to prevent our goods from this kind of incident but if peradventure it happens, only insurance packages can help minimize the loss that will ensue,” Ekwunife counseled.

In a remark on behalf of the traders, the Chairman of the Market, Mr. Samuel Ezeobodo expressed appreciation to Senator Ekwunife for coming to their aid.

“I want to thank our Senator for identifying with us in this period of misfortune. We are also appreciative of her financial support. What we promise as the market leadership is that all the monies received will be distributed to the 672 persons who lost goods to the infernor.

Ezeobodo appealed to government and other spirited individuals to support the affected traders to enable them to bounce back.

Senator Ekwunife also visited Loretto Special Science School, Adaziani where she also donated some cash and promised to mobilize more support both from the state and the federal government towards rebuilding the school hostel which was gutted by fire earlier this year.

Speaking, the Principal of the school, Mrs. Nneka Enemmuo who disclosed that this is the second time fire is destroying that same hostel of the school, appreciated Senator Ekwunife for the gesture.