Anambra State Government has inaugurated House Numbering Project for proper and easy identification of buildings across the state.

The exercise is expected to provide data that will be fed to Google Information System for proper identification of buildings for use in the areas of security, e-commerce, emergency response coordination, town planning and many others.

The project will be undertaken by the State Signage and Advertisement Agency (ANSA) in partnership with a private firm, Great Source and is expected to be completed within one year.

Streets naming and numbering constitutionally is supposed to be handled by the local governments but because of an understanding between Anambra State Government and the Local Governments, a Bill was passed by the State House of Assembly empowering the ANSAA to undertake the House numbering and other tasks while the money accruing from them will be shared between the State and Local Governments.

Inaugurating the exercise, Anambra State Governor Willie Obiano who was represented by the Secretary to the State Government, Prof Solo Chukwulobelu, directed the Local Government Authorities to immediately embark on naming of streets and establishing all the directional signs before the numbering commences.

“With this flag off, the state government is directing the local government authorities to immediately commence the naming of streets in their council areas. It will be problematic if the numbering is done without the streets having names. This is a noble initiative that will help us achieve better-planned cities across parts of the state,” he said. 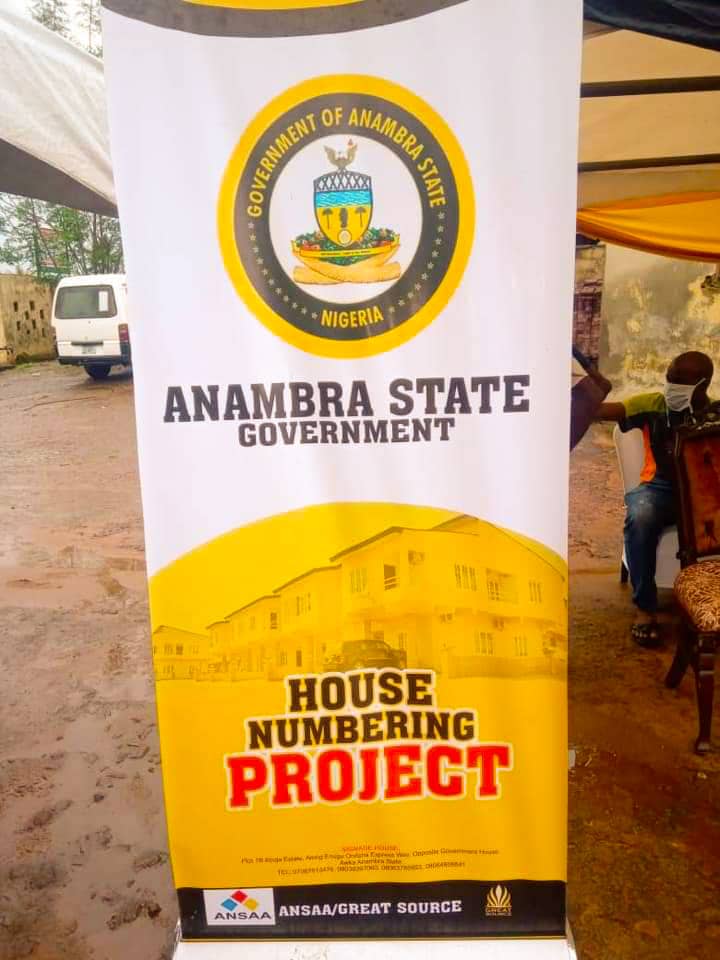 The governor commended the Anambra State House of Assembly for the speedy passage of laws that has helped make the developmental efforts of his administration seamless.

The Managing Director of Anambra State Signage Agency (ANSAA), Jude Emechetta explained that the agency undertaking the assignment instead of the Local Governments of the task, following the understanding they had with the State Government, that is backed by law.

“ANSAA was established to function for both the state and local governments in Anambra. Most of its terms of reference are statutory functions of the local government but there has been an understanding which was later backed up with a law, hence the involvement of the agency in this assignment. All we are asking is for the people to support the Agency on this initiative,” Emechetta said.

He said numbering houses across the state will help in correcting the confusion caused by improper house number, ensure proper identification and location of streets and houses during security and medical emergencies, for parcel deliveries, e-commerce among others.

The Chief Executive Officer of Great Source, Chief Emeka Okonkwo, who is also the House Numbering Project manager, thanked Governor Obiano for giving him the opportunity to carry out the project, assuring that at the end of the project, Anambra will be turned into a smart city state.