Anambra State Police Command has launched an investigation into an incident that happened at Umunze in Orumba South Local Government Area of Anambra State where a Police officer allegedly harassed a citizen, shot and deflated the tyres of his car.

An online video had shown the citizen, who identified himself as Henry Muokwe in his car videoing the whole episode even as the police officer videotaped as well.

Muokwe had in the video, complained that he was driving to a nearby bank at Umunze in Orumba South Council Area of Anambra State when the Policemen stopped him and demanded money before they will allow him to pass.

The incident which took place at Nkwo Umunze had attracted the attention of passersby some of who made attempts to plead with the Policemen to stop, as was shown in the video. 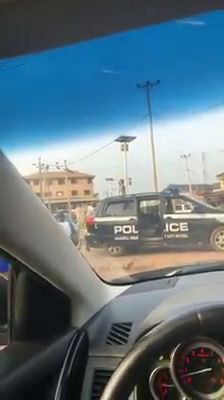 Reacting to the development in Awka, the State Commissioner of Police, John Abang said he has directed that investigations commence into the matter and if need be, the officer involved will be queried.

He said he has listened to the account given by the Police Officer and was convinced that even though the citizen refused to stop when asked to but instead tried to reverse his car and in the process hit one of the Police Smart Cars, it was not enough for the officer to have used the kind of force he used.

“I gathered that the incident happened during the lockdown implementation operation at Umunze. Immediately I got the information, I swung into action requesting the DPO to comment on the development and thereafter invited him to come to Awka on Wednesday with the officer involved. I have met with the officer and after listening to him, even though the gentleman refused to stop when he was asked to and instead reversed his car and in the process, rammed into one of the police smart cars, that was not enough to have used that kind of force on the citizen,” CP Abang said. 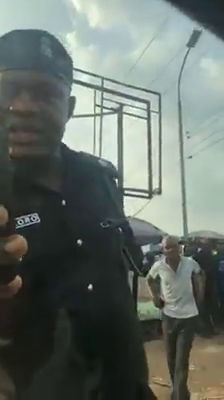 He revealed that he has also reached out to the citizen and invited him to his office in Awka today so that his statement can be recorded.

On whether the query is enough punishment for such offence considering the increase in police brutality during the lockdown, the CP said the query is only the beginning of the disciplinary actions that would be meted out to such officer if found culpable.

According to him, “In the Police, where a commissioned officer is involved in a disciplinary matter, the first step is to call the State Criminal Investigation Department to investigate the remote and immediate causes of that infraction. And when he is indicted, a query will be issued. When a query is given, the Commissioner of Police will then put down his comments and forward to Force Headquarters.

At the appropriate time, the officer will be invited and if he cannot defend himself, the Force will award punishment. You should also know that the punishment is subject to review by the Police Service Commission.”