People of Achina Community have cried out to the World Bank, Federal and Anambra State Government to urgently intervene on the erosion challenges faced by the community before the next rains.

Achina is one of the communities in Aguata Local Government Area, ravaged by gully, with more than five active erosion sites. 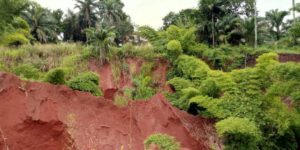 A visit to some of the sites shows that work has since been abandoned on them as some buildings have caved in and many others deserted by its inhabitants for fear of the threat the gullies pose.

The President General of the town, Chief Henry Ezeunara who spoke to correspondent regretted that control works on the sites have been abandoned, leaving the community at the mercy of the next rains. 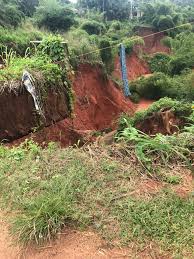 “The threat posed by erosion to our people is massive and has gone beyond what our self-help efforts can address. We have planted trees and dug catchment pits to reduce the speed with which flood damage the sites further. We have even tried to control the gullies but they have extended beyond our capacity,” he said

Ezeunara continued, “We have never failed to report these challenges to government immediately we observe them even as we had taken measures within our capacity as a community to tackle them. Our people are in dire need of help from government, the World Bank and the International Community. As it is now, this is the worst we have witnessed. If nothing is done, we may not live here after the next rains.”

An elder in the community whose house was affected by one of the gullies, Nze Michael Okpala, regretted how he

is living as a stranger in his country home.

“My house has been vacated. I now live in another man’s house as a tenant in my own community. I have no hope of reclaiming my building because even if the gully is tackled, I need a new house. I plead with government to come to our help as we have nowhere else to go,” he lamented.

A youth in the community, Comrade Vintex Ibe noted that the community appears to have been forgotten by government as it also has suffers the challenge of very bad road that has disconnected it from neighbouring communities.

“There is the Oye Achina-Onneh-Agbudu- Ogboji road which was awarded in 2015 by Governor Willie Obiano to Estrada Construction Limited and the road has a total length of 7.3 kilometers and cuts across major food baskets of the Old Aguata Union, OAU. Work had stopped on this road, resulting in gullies due to improper termination of flood water. This is also contributing to the gully problem we suffer as a community. We seriously need help in our community,” Ibe noted.