Airtel Africa debuts in Lagos in $4.4B listing

Airtel Africa on Tuesday listed on the Nigerian Stock Exchange in a 1.36 trillion naira ($4.4 bln) flotation turning the telecoms company into the bourse’s third-largest stock by market value.

Airtel Africa’s shares climbed 10% from their listing price of 363 naira after the float went live. Some 100,000 shares traded at Tuesday’s debut, helping the main stock index recover from a seven-week low.

“Investors have listened to our story and are very interested enough to invest in our business and are now ready to share the picture with us. Nigeria, which is one of our 14 countries is a great place for business and Airtel Africa remains committed to building a leadership position here and in our other 13 African countries,” said Airtel Nigeria CEO, Sgun Odunsanya.

The company, owned 68.3% by India’s Bharti Airtel, offered shares in its African unit two weeks ago via a London IPO and said it would dual list in Nigeria, its biggest market in Africa.

Airtel Africa, which operates across 14 African countries, had planned to list last week but the bourse postponed the cross-border listing to allow the telecoms firm to meet its listing requirements. 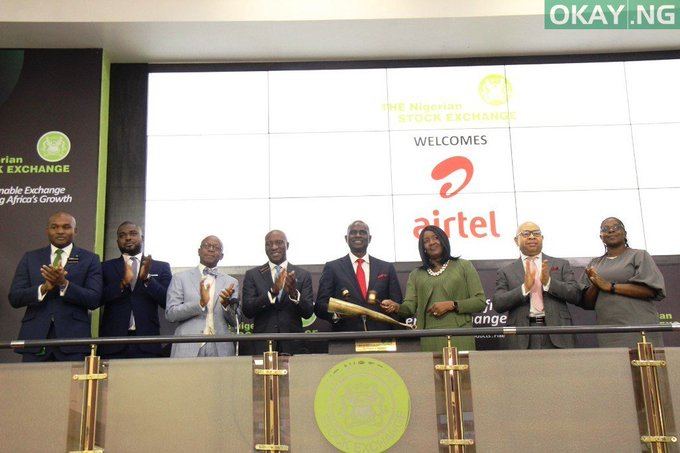 Airtel’s listing comes after main rival, South Africa’s MTN , listed its Nigerian unit in Lagos in May in a $6.5 billion float that made it the second-largest stock on the bourse by market value.
Airtel Nigerian Stock Exchange