In what was a hard fought victory, Adonis & Abbey Publishers, a London and Abuja based publisher of Professional books and academic journals, came from behind twice to defeat The News Chronicle, an online Newspaper based in Abuja, Nigeria in a friendly match by 3-2.

It was a cheerful atmosphere at Divine Mercy School, Asokoro, Abuja as fans of both teams chanted players’ names, especially when a player dribbled another. 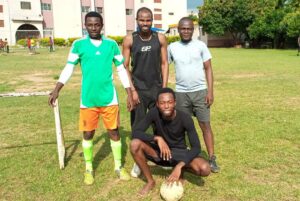 TNC’s skipper, Stanley Ugagbe put his team ahead through a clinical finish early in the first half after being set up by his teammate, Chukwuemeka JohnPaul.

Shortly after taking the lead, Adonis & Abbey’s star player, Alex Pankyes Dakwat, tied the game at 1-1 following a superb finish that was too much for the opposing team’s defender, Emmanuel Akaolisa to keep out.

However, Stanley Ugagbe scored his second of the day to restore TNC’s lead shortly after the interval following a solo effort from the rebound of his teammate, Gabriel Ujah’ shot. 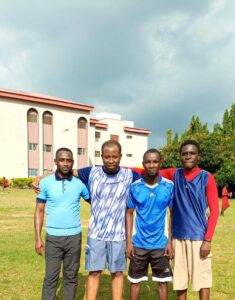 Moments later, Chukwuemeka JohnPaul of TNC added a 3rd goal in what would have buried the game but the referee ruled out the goal after a VAR check that lasted for over 3 minutes.

With ten minutes to play, Pankyes scored another screamer that got deflected off his teammate, Isaac Onyekachi to restore parity between the teams.

Wild jubilation erupted just a minute before the final whistle as Onyekachi struck from 12 yards to seal the victory for Adonis & Abbey.

For Adonis & Abbey, Jamiu Uthman Mohammed and Kehinde Fehintoluwa Israel put up some great defending prowess to stop the TNC’S attack from wrecking much havoc.